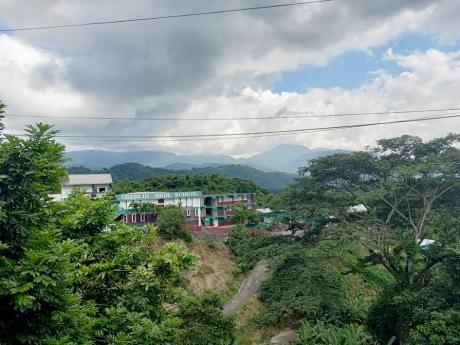 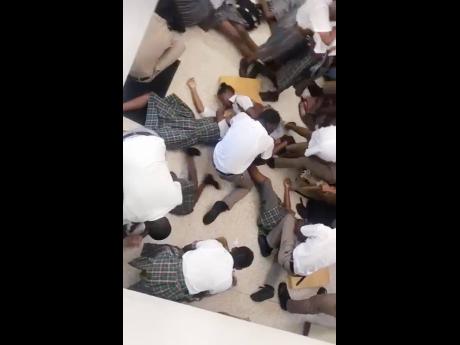 Students of Oberlin High School tend to schoolmates who collapsed during devotion. 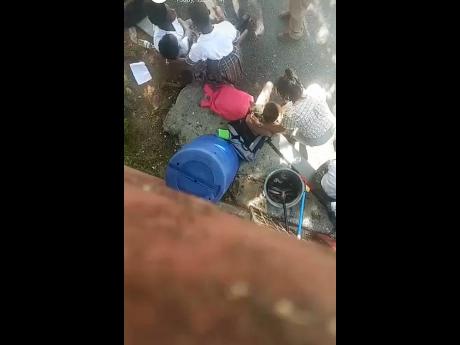 In this screenshot of a video circulating on social media, students of Oberlin High School attempt to calm classmates who collapsed during a devotion exercise at the institution yesterday morning.
1
2
3

A Christian woman who 'delivered' one of the many Oberlin High School students who were 'possessed' said she had to work overtime to rid the child of the demon that had taken up residence in her.

Icilyn Black, a member of the Greater Works Apostolic Work of Praise Church in Lawrence Tavern, St Andrew, said the student was brought to the sanctuary for deliverance after she became possessed.

"We saw a student from Oberlin and the power of God move. The girl was looking so fierce and was reacting in a way that was not of herself," said Black, who spoke in tongues during the interview.

Classes at the school were disrupted yesterday after students began displaying strange behaviours -- which some have interpreted as demon possession. A teacher who had reportedly informed the administration that she had a 'word' and wanted an opportunity to share, began speaking in tongues, and shortly thereafter the 'spirit' began to move through the school.

According to the school's acting principal, Antoinette Gray, it appeared that "during the worship some students were overpowered by the anointing and started to worship aloud as well". Some students had to be taken to the school nurse "because they could not control themselves". Others fainted, some of whom had to be transported off the compound for medical attention.

A staff member said that students dropped "like flies" after the teacher began praying.

"She was saying that God wasn't pleased with what was happening in the school and as she said Amen, a child bawl out 'Hallelujah'. After that, all hell broke loose. Children start dropping like flies and it was mostly girls. They were acting wild and speaking in different and weird voices. Some were fainting and screaming," the person said.

"It was pure chaos and is the first time I have ever seen anything like this. Children were also fainting and dropping on the road like flies. It was like demons were on the loose and got in them," the staff added. Black said the child appeared possessed and that she sought intervention from God who gave her certain instructions, which included the use of olive oil.

"When I did it the first time, the girl was still looking at mi fierce so I did what the Spirit said again. She then fell to ground on her back and some other church sisters were there working on her. The Spirit tell mi to put some olive oil in her mouth, but she wouldn't open her mouth. The Spirit say the demon is in her and is looking at people. The Spirit say throw di water in her eye and mi throw di water and she open her mouth same time and spit out back the olive oil after it went down her throat," she said.

Black, who said she is an evangelist, said minutes later the student returned to normal.

"The devil is out raging like a roaring lion so we need to pray and fast more. You have to do or touch something that entertain or invite the demons in. If one is invited in, then it is going to litter the place. More prayers are needed in the schools. We need to call upon God," she said.

However, it is likely that the nature of devotions in schools could be changed to exclude fiery ministries. Minister of Education Fayval Williams said her ministry will be implementing protocols for school devotional exercises.