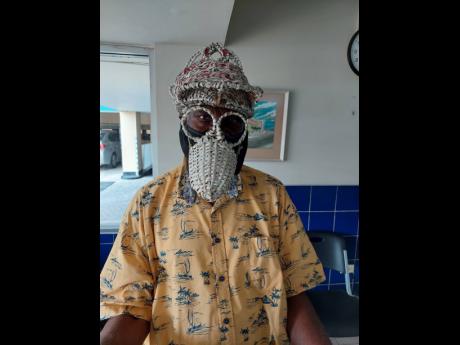 Daniel ‘Bramo’ Williams showing off his wicker mask and hat. 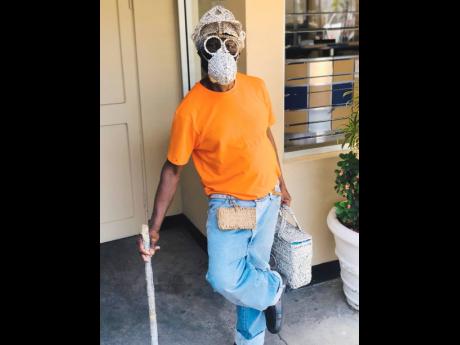 Since craftsman Daniel 'Bramo' Williams was featured in the March 3 publication of THE ST AR showing off his wicker creations, he has not been in a rush to sell any of his creations.

Instead the 69-year-old said he has spent the past few months making bags, lamp shades, hats and other items out of wicker for the fast approaching Yuletide season.

"The aim was to make enough and not to sell them one, one. When people see mi on the road inna di hat and the bag and picnic basket, dem always enquire and a ask if mi can make for them. Of course the aim is to make money, but mi nah go be jumpy. Mi want to get mi stuff dem paint up and ting. All di lamp shade and dem tings deh, people like dem so anuh buy people wouldn't buy dem," he said.

Never one to shy away from wearing his designs, which are all crafted from rose apple sticks and wicker, all eyes were on the senior citizen as he sported his muzzle mouth piece, mask and hat. He said he has grown accustomed to the stares and admiration and strongly believe that his customised bag will be in high demand for the Christmas.

"The bag weh mi always a walk with is a good Christmas gift. It has a lot of space in it, enuh, because is a lot of things mi carry in it including over 200 songs. Is just $3,000 for it and there is a hat to match for just $1,500. The hat and bag a good little gifts dem fi everyone. Dem different," he said.

Bramo said that water cannot penetrate his items once they are painted.

"In fact, if water even touch it and it nuh paint and water touch it, the material a go swell and it a go get stronger. But mi love when dem varnish and paint. Mi just a prepare myself because this Christmas mi know mi a go make some good sale because people want something different. Fashion rotate over a while so dis is something new and something Jamaican," Williams added.

Following the Yuletide season, Williams said he will be making additional pieces for his collection. His aim is for his creations to be highlighted on major fashion runways.

"Mi thinking about the bigger picture so mi a gwan make and have enough so mi can't run out when mi a sell. One day mi woulda wah get a chance fi see some top model a wear mi design dem. Mi would waan see dem a advertise all over the world because people love creativity so tings like dat can happen," he said.

Bramo also said that he is also looking forward to launching his music before the end of the year, even giving THE WEEKEND STAR a performance of his soon-to-be-released debut single This Love Is All Over Me.

"It's a love song and the females going to love it," he said.