No evidence that cop shooting was a hit - police commissioner 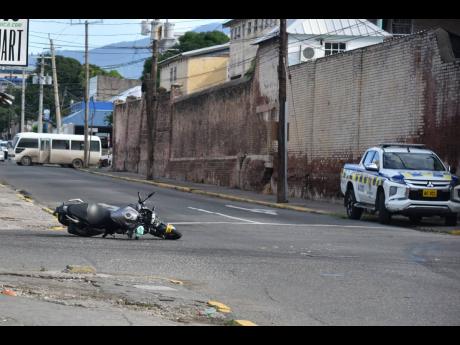 A policeman was shot and injured at the intersection of East and East Queen streets in Kingston on Tuesday. Investigators cordon the scene.

Commissioner of Police Major General Antony Anderson said there are currently no indications to suggest that a bounty was placed on a policeman who was shot and injured yesterday morning in downtown Kingston.

Speaking at an online press conference yesterday, Anderson said the police have heard the rumours.

"But we have nothing that establishes that it was the case so I would not even begin to speculate that was the case until we have further information that would indicate that. I went down to KPH [Kingston Public Hospital] and spoke to him myself to get a first-hand account of what happened, and based on what he indicated, there is no particular indication from the incident that that was what was happening," he said.

It is reported that the policeman, who had just exited the Central Police Station, was shot by men travelling on a motorcycle near the intersection of East and East Queen streets in the Kingston Central Police Division. The injured cop managed to take evasive action and return fire. He was later transported to hospital.

Since the start of this year, six policemen have been killed in the line of duty while three others have been shot and injured. Anderson said he is imploring members of the security forces to be mindful of their surroundings at all times.

"There are many who have a lot to say about police use of force. The problem is that none of these people are out there on the frontline being shot at. It is far easy to opine about things like these from places of safety. I am reminding my men and women that they need to be aware of their surrounding on and off duty," Anderson said.