Athletes on the move 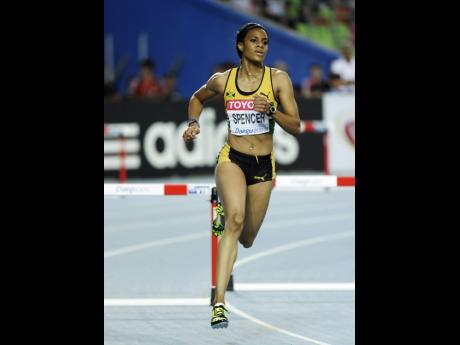 Athletes on the move

If anything, the weeks after the Beijing World Championships have been just as interesting as the 2015 season itself. The movements of bright prospects from high school to local colleges kept hard-core fans of Jamaican athletics on their toes, with some destinations a surprise. Bigger surprises were to come.

In the last few days, news has emerged of the reported displacement of Christine Day, Natasha Morrison and Kaliese Spencer, 2015 World Championships finalists all, from MVP Track Club. Similarly, Racers Track Club no longer has the services of Kerron Stewart, Schillonie Calvert and Ristananna Tracey. No details are being made available.

Stewart hasn't recaptured her sparkling 2008 and 2009 form at Racers, but just last year was third in the Commonwealth Games 100 metres, with Calvert also in the final. Healthy last year, Calvert ran steadily enough to also reach the Commonwealth 200 final. Tracey, a gifted 400-metre hurdler, has never approached the form she showed as an Edwin Allen High student athlete.

The movement at Racers illustrates one cold truth about professional sport. Not that long ago, American Freddy Adu was thought of as the next big thing in football. Now, even the keenest fan can barely remember the lad.

Further afield, two-time Olympic javelin Andreas Thorkildsen of Norway has revealed he no longer has any sponsors. Dogged by a prolonged bout of injury, Thorkildsen says he now survives on his savings. It's a tough blow for the man who is one of history's finest spear throwers.

Until more information is made public, it's hard to make detailed comments about the MVP departures. Day, Spencer and Morrison have enjoyed recent success. While Day and Spencer are 29 and 28 years old, respectively, Morrison is just 22. She arrived at the University of Technology from Glengoffe High with injuries and had gradually sprinted into world class.

Athletically, Day, Spencer and Morrison now face coaching changes as they approach the 2016 Olympic Games. When Jeremy Wariner changed coaches in the middle of the 2007 World Championships 2008 Olympics 2009 World Championships cycle, it didn't work well. He lost his dominance of the men's 400 metres to fellow American LaShawn Merritt, who beat Wariner at the Olympics and the World Championships.

Two-time national 400 metres champion Day lowered her personal best to 50.14 seconds for fourth place in Beijing. She appeared ready to go faster in Rio de Janeiro next year and in London, hosts of the 2017 World Championships. Few would recommend a coaching change for her, Spencer or Morrison at this time.

Hopefully, all of those who allegedly are on the move from MVP and the Racers will land on their feet. In 2016, Day, Spencer and the 31-year-old Stewart face what might be a final chance at Olympic glory. Along with their new coaches, they simply have to keep on moving.