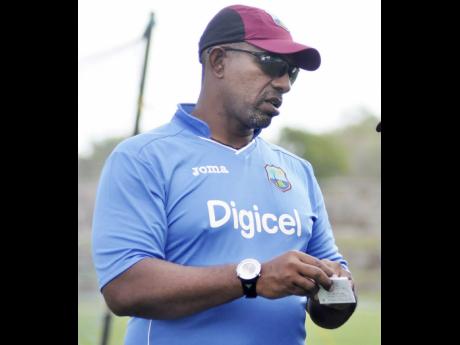 Head coach Phil Simmons has apologised to his fellow selectors and to the West Indies Cricket Board for his outburst last Friday, calling his actions "a schoolboy error in a moment of madness."

The 52-year-old Trinidadian wrote to express his "sincere apologies" for his comments which sent shockwaves through the West Indies cricket fraternity and led to his subsequent suspension for the Sri Lanka tour.

Simmons took the bizarre step of publicly castigating the selection process regarding the one-day team for the tour of Sri Lanka, saying team selection had been influenced by "interference from outside."

"In no way did I intend to even mention the issues of selection. It was not in any way intentional and so therefore I needed to express my deepest regret to you and my fellow selectors," Simmons wrote.

"I can only describe it as a schoolboy error in a moment of madness. This was not within my character."

"He added: "I need to apologise as I am genuinely sorry."

Despite the apology, Simmons is now set to face a WICB panel to answer for the outburst, with WICB chief executive Michael Muirhead saying Tuesday a decision would be reached within the next seven days.

Muirhead said Simmons would be given "a fair hearing" with the investigation conducted "within the boundaries of our own internal human resources policy."

"During the process, he will continue to enjoy the benefits of his full remuneration," Muirhead outlined.

"The matter will be dealt with in an expeditious manner and it is our intention to have a decision within the next seven working days."

In a media conference last Friday in Barbados, at the end of a week-long training camp for the Test squad, Simmons expressed his frustration with the continued non-selection of the Trinidadian duo of Dwayne Bravo and Kieron Pollard.

He said he and chairman of selectors, Clive Lloyd, had voted for their re-inclusion but the three other selectors - Courtney Walsh, Eldine Baptiste and Courtney Browne - had voted against the move.

Baptiste, who was set to be the 'selector-on-tour' will now take over duties as head coach in Simmons' absence.