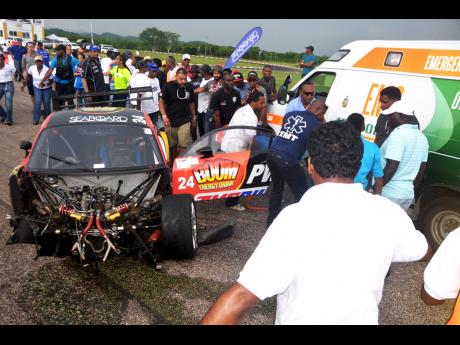 Doug Gore's mangled Audi TT DMT after his crash with rival David Summerbell in the Group Four event of the Seaboard Marine Caribbean Motor Racing Championship (CMRC) at the Jamwest Motorsports and Adventure Park in Westmoreland on Sunday.

Jamaica Race Drivers Club President Monique Gibbs has said that sanctions may be levied based on the outcome of an investigation into Sunday's crash between Doug Gore and David Summerbell Jr in Group 4 of the Caribbean Motor Racing Championship race at the Jamwest Motor Speedway.

"In any form of racing, we have rules, and if the rules are not adhered to, then the requisite penalties may be applied," Gibbs told Star Sports.

She said that these penalties may vary based on the results of investigations, which she said are still being conducted.

"It is a craft of things. If the start wasn't done properly; if the race should have been restarted or regridded; if someone picks the start, they are pushed back in terms of position, but because the race had not yet started, we have to do the requisite checks before we can apply any penalties.

"It's still early and we are gathering all the evidence so we can make the appropriate decision."

Summerbell had said after the crash that the incident could have been prevented if the race had been started lower down the track. However, Gibbs said she would not be drawn on that as yet.

"That's David's position on it, but my position is that I'm going to be working with the race officials to do a review of all the race material. We're gathering all the data and we're not going to preempt a decision. I have to be responsible in terms of what I say on the matter because I haven't done the proper evaluation as yet."