"Ras" Lorne attracting attention for much than great chess 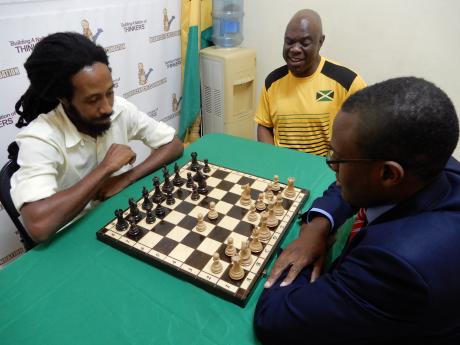 Jamaican chess FIDE (International Federation of Chess) Master Malaku Lorne likes travelling overseas to represent the nation in the sport. However, on his travels, he has found that he attracts attention from international opponents, not just for his prowess on the board, but also his appearance.

Lorne, who sports very long dreadlocks, is a member of the Rastafarian faith and has even received comments in jest that he has a strong resemblance to the late international Reggae icon Bob Marley.

While most would perhaps become annoyed at constantly being asked certain stereotypical questions based on Rastafarianism, Lorne does not let it get to him. Instead, he decides to have fun with his responses whenever these questions are asked.

"Going abroad to play chess propels me towards stardom, being a black, Rastafarian chess player. Everywhere I go, I get a lot of attention. Quite often, let's just say, some of the times they ask if I'm related to Bob Marley. I let their minds imagine whatever they want," he laughed.

"People have asked me if I smoke. Even Jamaicans ask but I don't smoke at all. I expect those questions but because I'm not what people see as the typical Rasta, in that I don't smoke, I don't view it as being stereotypical."

Lorne, is the reigning National Blitz (a two minute version of chess) champion and was also named the RJR Sports Foundation Chess Player of 2016. While an aspiring lawyer, Lorne also spends a lot of his time teaching younger players the sport. In doing so, he aims to pass on important values and ethics needed to excel in the sport. One of these is patience.

"Usually, the younger players will give you a timeline which they say: 'I want to beat you in, for example, three or five years.' I would say: 'I'm expecting it but try and do it a little faster,' he said.

He is, however, optimistic about the future of the sport as he believes that youngsters are now getting more opportunities to travel and improve their technique by playing better opponents overseas.

"The opportunities for the younger players to travel and improve have definitely increased," he said. "Increased competition will lead to improvements in the players. Playing the same players continuously is not the best means for improvement."