Ja U-20 Girlz bow out with draw 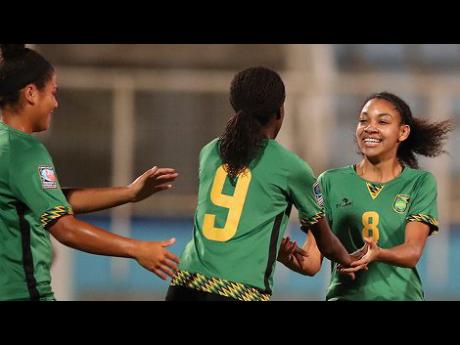 Jamaica managed to stave off a third straight defeat when they played to a 2-2 stalemate against Nicaragua in their final group game of the CONCACAF Women's Under-20 Championship on Tuesday.

Playing at the Ato Boldon Stadium in Couva, Jamaica appeared to be en route to their first victory of the campaign when they led 2-1 inside the last 10 minutes of the contest, but they conceded late on to settle for a share of the points.

The draw left them bottom of Group B on a single point, following defeats to powerhouses Mexico and the United States in their previous matches.

In perhaps their best showing of the tournament, Jamaica took the lead in the sixth minute when Olufolasade Adamolekun got on to the end of Jody Brown's cross to beat goalkeeper Alicia Norori.

Nicaragua drew level in the 23rd minute, however, when Nevillegail Able brought down Jaclyn Gilday inside the box and the midfielder converted from the spot, sending goalkeeper Sydney Schneider the wrong way.

With the scores locked 1-1 at half-time, substitute Jazmin Grant restored Jamaica's lead in the 63rd with an excellent solo effort, racing into the box and beating the keeper at the near post.

The lead stood for nearly 20 minutes and with time ticking away, Nicaragua found the precious equaliser when Yessenia Flores produced a sweetly timed volley from 18 yards out to get the better of Schneider.

On Monday, hosts Trinidad and Tobago lost their third straight match of the tournament, going down 2-1 to Costa Rica. They finished bottom of Group A without a point.

Canada swept all three of their matches to top the group with nine points, with French Caribbean side Haiti finishing second to also qualify for the semi-finals.

Unbeaten United States topped Group B with Mexico second, to advance to the final four.