My best race ever - Boldon 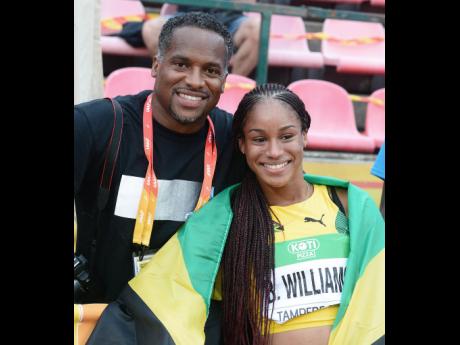 Twenty years ago, on September 17, 1998, Ato Boldon of Trinidad and Tobago produced the performance he describes as his best race ever. Now the coach of Jamaica's World Under-20 100 and 200 metre champion Briana Williams, Boldon produced a still standing Commonwealth Games record of 9.88 seconds despite very mild wind conditions and a slow track underfoot. He also, revealed that his super start in that race was no accident.

Boldon, whose mother is Jamaican, had expected to win the sprint showdown in the Malaysian city of Kuala Lumpur, despite the presence of luminaries like Obadele Thompson of Barbados and Namibian Frank Fredericks.

"I was as confident as I have been going to the line", he recounted. That confidence was founded in work done to refine his start. "They had allowed me to spend an entire day practising with the guy who was going to start the race."

"So I knew that starter's cadence pretty well so when I moved in 98, it's not because I heard the gun", Boldon related. "It's because I was expecting the gun."

Boldon, then 24, led from the start and outran Fredericks and the slow starting Thompson. The absence of an aiding wind and the slow track makes Boldon think highly of his winning time of 9.88.

"You could make the case that it was probably my best race ever because given that wind and that time, my personal best of 9.86, so to run 9.88 and the wind is like point 1, so I was very confident when I stepped to the line," he calculated.

Nevertheless, the victory made him the fourth Caribbean athlete to win Commonwealth 100m title following triumphs in 1954 by his countryman Mike Agostini, and wins by Jamaicans Keith Gardner in 1958 and Don Quarrie in 1970, 1974 and 1978.