RSPL season could be delayed as refs plan to take action 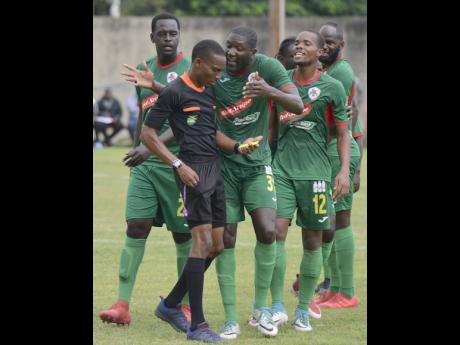 Humble Lion players surround referee Tyrone Robinson after he issued a yellow card to one their players during a Red Stripe Premier League match last year.

The start of the 2019-20 Red Stripe Premier League season could be delayed as local referees are not eliminating the possibility of taking industrial action for unpaid wages from last season.

According to a highly placed source, who has requested anonymity, the referees and match commissioners are willing to work with the Jamaica Football Federation (JFF) and The Premier League Clubs Association (PLCA), however, they are growing restless over the lack of improvement in talks.

They have yet to be paid for the concluded 2018-2019 season. The contentious atmosphere created by this has left the country's officials with their options limited. The source was adamant that the referees would not work without being properly compensated.

"The question referees are asking is, What is going to happen? Because they are not willing to go back out there [without being paid] and that is only fair," the source said.

At present, the referees are owed approximately $2.32 million in outstanding fees for league play alone, and in excess of $4 million including the play-offs.

The new season is scheduled to begin in the first week of September, but there have been no updates in terms of the new body that will be responsible for the marketing and management of the league going forward. The JFF dissolved the Professional Football Association of Jamaica (PFAJ) earlier this year due to a directive from Concacaf, commissioning the PLCA to form a special body solely responsible for the league's operations.

That body has yet to be formed because of a decision by the JFF for the PLCA to resume acquiring sponsors for the league on a temporary basis due to time constraints.

General Secretary of the JFF Dalton Wint stated in an interview with The Gleaner on August 12 that the non-payment of referee fees was one of the critical issues holding back the formation of the body and pledged that the situation would be resolved before opening week.

"There are outstanding monies to referees and match commissaries and other expenses that are still outstanding, and definitely, they will have to be dealt with firstly. So we are hoping that everything will be settled in the next four weeks. We are planning to start [the RSPL] the first week in September, so in the next three weeks, it should be resolved," Wint said.