Race 9 will be a real thriller 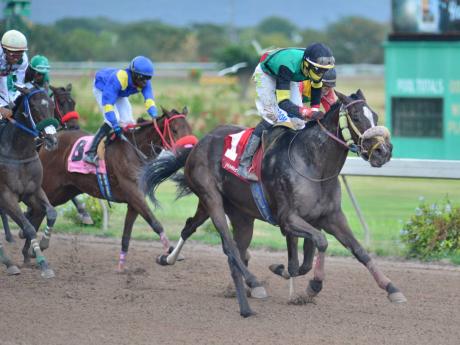 IT was a real bumper-car affair the last time CAMPESINO, EYE CANDY, CRYPTOCURRENCY and BOLD AFLAIR met, a five-and-a-half furlong overnight allowance won by DUNROBIN on January 18, making Saturday's rematch at five furlongs straight an event that cannot be judged on the finishing positions from three weeks ago.

Apart from being a straight sprint, in which draw and trip preference rank high, almost outweighing handicaps, the multiple incidents from the January 18 event, starting from the moment the horses left the gate, until well inside the last half-furlong, could completely flip the placings from three weeks ago.

CRYPTOCURRENCY was boxed in at the start by, first, no-hoper NUCLEAR THUNDER, then none other than the winner, DUNROBIN, and BELTANE. She was afterwards hemmed in behind the leaders to the half-mile marker where she settled on the rail and got what started out as a ground-saving run into the lane.

However, entering the straight, CRYPTOCURRENCY had to step off the rail to make her run and was hemmed in by DUNROBIN, CAMPESINO, EYE CANDY, and BOLD AFLAIR, a quartet that formed a virtual wall, forcing Oneil Mullings to drift the filly five-wide inside the last furlong, dashing any chance of her overhauling the leaders.

With a clear run, carrying 110lb, being among the lightest in the line-up, CRYPTOCURRENCY, even from post-position two, could produce a storming finish inside the last half-furlong with the handicaps in her favour.

CAMPESINO was also hindered, at the half mile, actually taken in hand by Reyan Lewis when a combination of EYE CANDY, BOLD AFLAIR and DUNROBIN, took the 10-year-old's ground on the turn, causing him to drop back into fourth place after almost disputing the lead, forcing him four-wide approaching the three-furlong marker, even passed by rail-running CRYPTOCURRENCY.

BOLD AFLAIR, as well, was squeezed for space when challenging, between DUNROBIN and EYE CANDY, leaving the three-pole, an incident which won't be repeated with the importee now drawn widest on the stands' side.

CAMPESINO, the old stager, is worst drawn, post-position one, with 121lb, seemingly with a mountain to climb but could still use his back class to pull off a victory against his better-positioned and younger rivals. Apart from being a strong finisher at the distance, CAMPESINO twice went under 59.0 seconds in defeat last year, the last being 58.3 when going down to PATRIARCH's lightning-fast 57.3.

An improved EYE CANDY ran her heart out on last but found DUNROBIN and BOLD AFLAIR equally swift. EYE CANDY carried 101lb then but trainer Dennis Lee has strangely ditched his strategy of using apprentice riders in favour of Harriston Lewis at 116lb, a 15lb jump, not exactly the wisest of decisions with BOLD AFLAIR returning at an exact 119lb.

Only a length and three-quarter separated second to fifth behind DUNROBIN - CAMPESINO, BOLD AFLAIR, EYE CANDY and CYPTOCURRENCY - in an incident-plagued race. Take no chances with any of the four and approach the race with extreme caution.