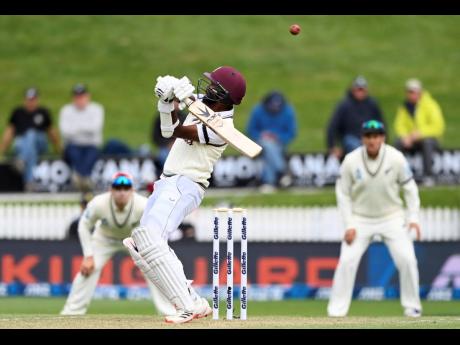 West Indies’ Kraigg Brathwaite in action against New Zealand on day three of their first Test in Hamilton, New Zealand, on Saturday, December 5.

Former West Indies fast bowler Franklyn Rose says the current team's recent poor showing in New Zealand calls for changes to the regional side's set-up if they are to improve their fortunes on the international stage.

The Jason Holder-led and Phil Simmons-coached West Indies has won just one in four Test matches in this COVID-19-hit year, and Rose, who was speaking on the 'Mason and Guest' radio talk show in Barbados recently, says things have to change to get a different result.

"This has been going on for years and we need to make some changes," Rose said. "One of the problems I have seen in local domestic cricket is that the standard and quality of the cricket is poor."

Rose is adamant that the first-class set-up needs improving, and much more should be done to get the grass-roots programmes across the region to produce more talent.

Rose says more of the region's best talent should be plying their trade overseas in the longer formats of the game.

"Back in the day when the West Indies dominated cricket, most of the guys played county cricket," he said. "How many of our guys are playing county cricket at the moment? There is none."

After the recent 2-0 series loss in New Zealand, the West Indies batsmen continued to find the going tough away from home, while the bowlers struggled at times to pick up wickets in favourable bowling conditions.

Rose is adamant that some of the players in the team should be dominating international cricket, having played at the highest level for over 10 years.

"We need guys now to be batting for two days, and bowlers who are going to bowl 30 to 35 overs in a day without worrying about injuries," he said. "We don't find that anymore and we don't have any match winners, that person who is going to make 150, or someone to regularly take five wickets."

West Indies are expected to tour Bangladesh from January to February 2021, with the teams set to play three One-Day Internationals and two Tests as part of the Cricket World Cup Super League and World Test Championship, respectively.