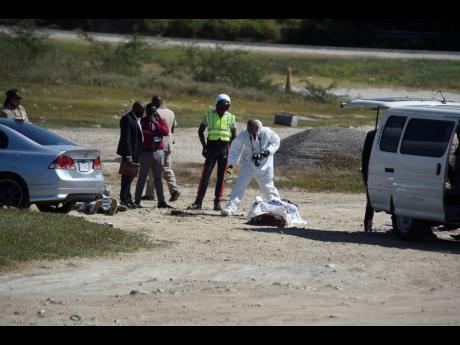 Police process the scene where the bodies of Nicholas Neufville and Rahiema Edwards were found yesterday morning in Portmore, St Catherine. Calabar High School is in a state of mourning over the death of jumps coach Nicholas Neufville who was found dead yesterday morning.

The body of the 38-year-old was found in an open lot yesterday in Portmore, St Catherine, along with a 19-year-old woman identified as Raheima Edwards. Neufville was reportedly identified by his brother who arrived at the scene.

In a statement released yesterday, Calabar remembered the man affectionately known as 'Soapman' for his contribution both as a junior athlete and later as a coach taking over for the late Barry Robinson.

"Coach Soapman successfully conditioned numerous athletes in both the long and triple jump events. His charges have secured scholarships to study internationally and locally, represented Jamaica on numerous teams both regionally and internationally at both the junior and senior levels," the statement read. "A coach, mentor and friend to generations of Calabar Lions; Coach Neufville, Soapman, Nicholas, Sir or just Coach has touched all our lives and left us better for having interacted with him."

Similar sentiments were shared by Legacy Track Club, the nation's latest track club where he was a co-owner and which is based out of the institution. On their Instagram page, the club paid tribute to Neufville, vowing to continue the work that he started.

"The Legacy Athletics Family is grief-stricken at the unexpected passing of our friend, brother, co-owner and founding coach Nicholas (Soapman) Neufville. He will live on in our memories and we will continue to build our legacy in his honour," they said. "Our thoughts are with his family, close friends and associates especially the Calabar High School fraternity."

Among the various alumni who paid tribute to Neufville included national 400m runners Javon 'Donkey Man' Francis and Christopher Taylor who both reflected the loss of their coach on Instagram.

"RIP. I cannot believe my high school coach died," said Francis. Neufville also helped to guide young athletes on the regional level having served as coach for the Carifta Games and most recently at the 2019 Under-20 Pan American Championships in Costa Rica.