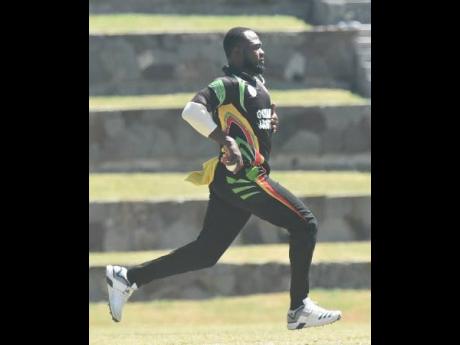 Chasing just 154 at the Vivian Richards Cricket Stadium after fast bowler Joseph had wrecked Volcanoes with a four-wicket haul, Jaguars stormed to a nine-wicket win inside 29 overs, courtesy of Hetmyer's 67 not out.

The victory was the fourth of the tournament for Jaguars who finished second in the standings on 16 points behind the unbeaten Trinidad and Tobago Red Force, while Volcanoes ended third on eight points.

While the contest was of academic interest especially with both teams already qualified for the next round, it served as a prelude for Thursday's second semi-final which will see the two sides clashing again.

Choosing to bat first, Volcanoes were bundled out for 153 off 45 overs with Emmanuel Stewart top-scoring with 46 off 82 deliveries and Barbadian Kevin Stoute hitting 41 from 72 balls.

But the innings was never stable after Joseph (4-24), in his second match of the tournament, wiped out the top order in a lethal early burst that sent Volcanoes tumbling to 22 for four in the ninth over.

Joseph struck twice in the morning's first over when he had Andre Fletcher caught at cover by Imlach of the first legitimate delivery without a run on the board and then removed captain Sunil Ambris for two with the final ball of the over.

Ninth over without scoring

Tottering on four for two, Volcanoes lost Alick Athanaze for seven in the fifth over, bowled by Joseph, and Roland Cato followed in the ninth over without scoring, whipping the same bowler to Hetmyer at short mid-wicket.

Stewart and Stoute then patched up the innings in a 60-run fifth-wicket partnership, before Keron Cottoy (27) joined Stewart to add a further 39 for the sixth wicket, as Volcanoes fought back.

While Stewart struck four fours, Stoute counted two but perished with a half-century beckoning, holing out to deep square leg after failing to keep down a slog sweep at left-arm spinner Gudakesh Motie in the 27th over

And the last sign of resistance disappeared once Stewart fell in the 37th over by the run out route, as the last five wickets went down for 32 runs, with Chandrapaul Hemraj (2-11) snatching the last two wickets to fall in one over with his left-arm spin.

In reply, Hemraj got Jaguars off to a flying start, lashing an uptempo 41 off 32 balls with seven fours and a six, as he put on 62 off 58 balls for the first wicket with Imlach who was unbeaten on 37 from 80 balls at the end.

The left-handed Hemraj had drilled off-spinner Athanaze to the cover boundary off the previous delivery when he played back and was bowled by the fourth delivery of the 22-year-old's first over and the 10th of the innings.

However, Hetmyer entered to dominate the remainder of the run chase, belting three fours and four sixes in a swift 60-ball knock, as he added 93 in an unbroken second-wicket stand with Imlach.

The West Indies left-hander raced to his second 50 of the tournament off 46 balls in the 22nd over by sweeping Athanaze to the fine leg boundary, but it was Imlach who struck the winning runs when he pulled a rank long hop from leg-spinner Cottoy to the ropes at mid-wicket.