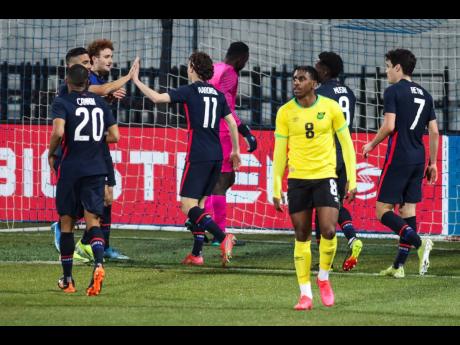 US players celebrate after scoring their second goal during the international friendly soccer match between USA and Jamaica at SC Wiener Neustadt stadium in Wiener Neustadt, Austria, Thursday, March 25, 2021.

National goalkeeper Jaedin White, in his first start and first full 90 minutes, put in a solid performance against the United States in their international friendly last Thursday and never seemed to be at fault for any of the goals in the team's 4-1 defeat to the Concacaf giants.

But the 20-year-old remains very disappointed with the result, days after the contest, as he believed they could have done more to achieve a better result.

The Cavalier goalkeeper said despite the positive feedback he has received generally, he thinks the margin of the defeat overshadowed any positives they might have had on the field.

"This is my first start in the national team and my first full 90 (mins). As I get to understand they are trying to see some new players and I happen to get my first full 90 in that process," he noted.

"The experience was good for me and after the game persons reached out to me and say that at 20 (years old), to be playing a full 90 minutes is a good achievement. But, in the end, I am disappointed by the result because that is not how I wanted my name to be remembered," he said.

"People say there are positives but I don't see it because the result was not a positive one, so that meant nothing to me because it gets me nowhere and my aim was to be dominant and win the game but what was being done (on the field) was not enough to get the end game right."

Even though he has not come to terms with the disappointment as yet, he admitted that not having adequate time to prepare played a major role in their defeat.

"After the game I didnt want to see or hear anything about it (game) because I lost, and it must because I wasn't doing something right. Maybe when I get over it, I can find out what I did wrong but at this time I really don't want to know because I am really disappointed in the result.

"But I think the reason the game went sideways is because of preparation. We didn't really train enough as a team, while the US players have been together for a while, so they are more resilient and can work things out over longer periods. We maxed at a point in the game where finding solutions was not easy for us," he said.

Nevertheless, he thought all the players gave their all on the day, and did their best under the circumstances.

But despite his personal disappointment, the young goalkeeper, who has three caps for the national team, is hoping to keep a place in the squad going forward.

"In terms of the Gold Cup and World Cup qualifiers, I am just hoping to be a part of that because at the end of the day it is the coach's decision who goes and who plays. I don't know what to say because losing the game is a big damper, so I don't know what to say about my chance of even being in the team going forward. But I look forward to whatever opportunity I get and I will respect the decision of the coach," he added.