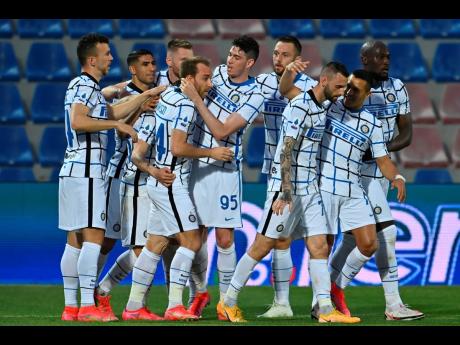 Inter Milan’s Christian Eriksen (fourth form left) celebrates after scoring his side’s first goal during the Italian Serie A match against Crotone at the Ezio Scida Stadium in Crotone, Italy, on Saturday. 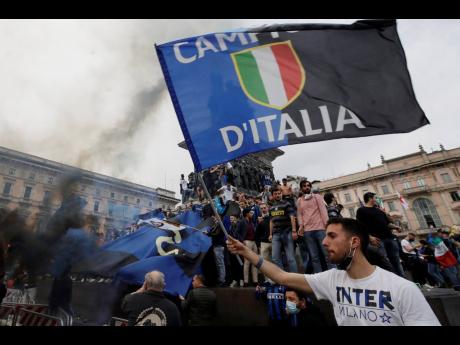 Inter Milan fans celebrate and shout slogans in Piazza Duomo square in front of the gothic cathedral after Inter Milan won its first Serie A title in more than a decade after second-placed Atalanta drew 1-1 at Sassuolo, in Milan, Italy, Sunday, May 2, 2021.
1
2

Inter Milan won their first Serie A title in more than a decade after second-place Atalanta drew 1-1 at Sassuolo yesterday.

The city of Milan erupted into a cacophony of car horns after the final whistle confirmed Inter as champion, and fans immediately started gathering in the main square in front of the cathedral to celebrate.

It was Inter's first trophy since 2011 and the first Serie A title since 2010, when they claimed the treble of the league, Champions League and Italian Cup.

Atalanta needed to win to avoid Inter mathematically clinching the title with four matches remaining, but their chances of doing so diminished dramatically when goalkeeper Pierluigi Gollini was sent off in the 23rd minute, leaving his side with 10 men for most of the match.

Robin Gosens scored for Atalanta nine minutes later, but Domenico Berardi levelled from the penalty spot early in the second half. Atalanta had a penalty saved later on after Sassuolo also had a man sent off.

Inter ended Juventus' grip on the league crown. Inter coach Antonio Conte led Juventus to the first three of its nine successive Serie A titles, but ended that run in his second season in charge of the Nerazzurri.

After Inter won 2-0 at Crotone on Saturday, Atalanta was the only team that could possibly catch Conte's side, and needed to win to do so.

Atalanta were dominating until a moment of madness from Gollini saw him fly out from his area and barge over Sassuolo midfielder Jeremie Boga, earning himself a straight red card.

Despite the numerical disadvantage, Atalanta took the lead when Ruslan Malinovskyi flicked a ball over the top and Robin Gosens let it bounce before volleying into the far corner from a tight angle.

Duvan Zapata thought he had doubled Atalanta's lead, but his header was ruled out for an offside on teammate Berat Djimsiti.

Sassuolo levelled seven minutes after the interval when Rafael Toloi was adjudged to have pushed over Hamed Junior Traore and Berardi struck the resulting penalty into the bottom-right corner.

Sassuolo also had a goal ruled out for offside shortly after, before also having a man sent off when defender Marlon was shown a second yellow card and gave away a penalty for a foul on Luis Muriel.