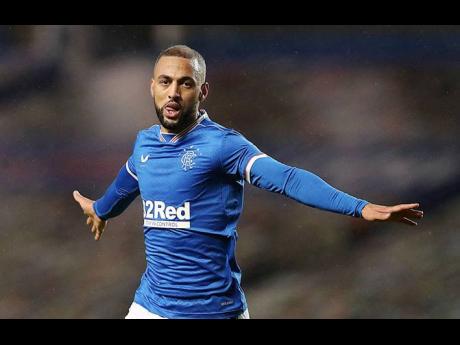 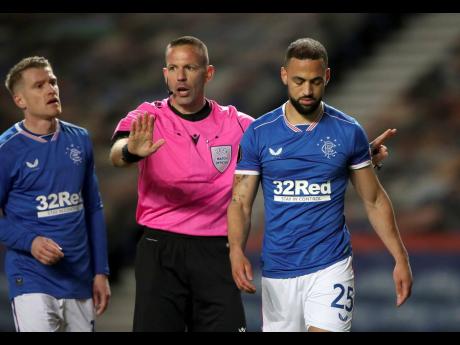 UK-born Roofe, 28, netted in the 26th and 57th minutes as Rangers pulled off a third league victory in the so-called Old Firm derby against Celtic, who played for 64 minutes with 10 men.

The game roared to life with three goals and a red card for Celtic midfielder Callum McGregor during a frenetic seven-minute first-half spell.

McGregor saw red after Roofe's opener, having been shown a second yellow inside three minutes for scything down Glen Kamara in the build-up.

But Odsonne Edouard levelled before Alfredo Morelos smashed the champions back in front, Roofe added his second and former England striker Jermain Defoe slid in a late fourth.

The opener came after Ryan Kent's shot flew in front of Roofe, who showed terrific presence of mind to divert the ball into the net with his chest.

Borna Barisic teed up Roofe to head home Rangers' third, with the forward given the freedom of the Celtic box to pick his spot.

The victory means Rangers are two games away from an unbeaten league campaign, which would match their city rivals' feat of 2016-17.

Celtic are already sure of second spot but trail their rivals by a whopping 23 points, and have gone a full season without winning a derby for the first time since 1999-2000, losing four out of five games to Rangers in all competitions.

Said manager Steven Gerrard afterwards: "The game plan worked to a T. I wanted to put two men right up against those centre-halves and cause them problems.

"The three of them (Roofe, Morelos and Kent) were superb and they're the reason why we've won comfortably."

Roofe received an invitation through his Jamaican heritage to play for the Reggae Boyz in the 2019 Concacaf Gold Cup.

This March, Jamaican officials again approached Roofe as part of their ambitious plan to call up a string of English-born players and increase their chances of qualifying for next year's World Cup in Qatar.

This time Roofe expressed an interest, saying: "Who wouldn't want to go to a World Cup?"

He said he was in the process of applying for a Jamaican passport.