Shaw most likely to move to England – Laverty 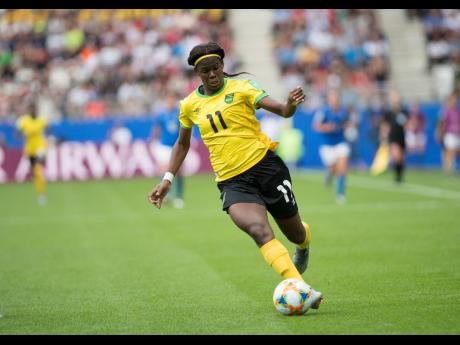 With increased speculation over the immediate playing future of national striker Khadija Shaw, British journalist Richard Laverty says that England is most likely the next destination for the Reggae Girl in order to take the next step in her career.

Reports surfaced last Thursday that the 24-year-old Shaw, who in the final months of her two-year deal with French club Bordeaux, is on the radar of English Women's Super League (WSL) side Manchester City and is closing in on a transfer to the club.

Shaw is currently having an impressive second season with Bordeaux as she is the league's joint-top goalscorer with 20 goals, along with Marie Antoinette Katoto of Paris Saint Germain (PSG). Additionally, Shaw has her club in third place in the league with 41 points and in pole position to qualify for the Women's Champions League next year, with three games remaining.

Laverty, who is also the creator of the yearly top 100 female footballers list, says that despite interest from the United States in the National Women's Soccer League (NWSL) and the top clubs in France, England seems to be the most likely destination for Shaw to land.

"I think there's a very good chance (she lands in England), but she has many options. I think everyone has now seen the stories about Manchester City and it appears Shaw is close to joining the club, but there has also been interest from Chelsea, Arsenal and Everton," Laverty told STAR Sports. "I also understand both the top French sides (Lyon and PSG) are interested, plus several NWSL clubs, including new expansion side Racing Louisville, so she has many options."

The WSL has seen an increase in the number of high-profile players that have signed for clubs this season, including 2019 World Cup winners from the United States Sam Mewis, Rose Lavelle, Alex Morgan and Christen Press, as well as Danish striker Pernille Harder, who signed for league leaders Chelsea for a reported world-record fee of 300,000 pounds from German club Wolfsburg. The Football Association recently reached a three-year TV deal with broadcasters Sky and the BBC which starts next season and reported to be worth seven million pounds a year.

While confident that Shaw has the tools to further cement herself as one of the top players in the world, Laverty believes that the next natural step in her evolution is to perform consistently at one of the top clubs in the world, no matter which country she ends up playing in. Additionally, he says that it would be no surprise of her moving further up the top 100 ranks when she eventually moves to a bigger club.

"I think she has everything to become a top player, and naturally, she will grow and improve as she gets older, but I think the best thing that can elevate her is to go to a top club and train and play with and against top players every week, whether that be in England or elsewhere," Laverty said.

French journalist Romain Balland tweeted on Friday that no agreement has been reached with Manchester City as yet and that her current priorities are to win the league goalscoring title and confirm Champions League qualification for Bordeaux.