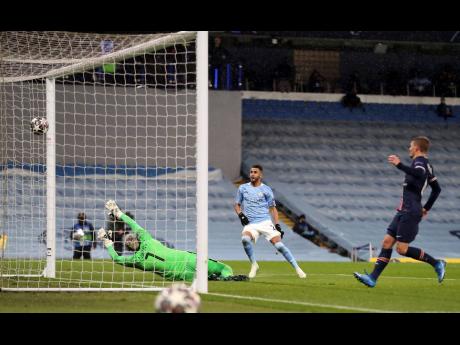 By the time Riyad Mahrez completed the counter-attack that sealed Manchester City's spot in a first Champions League final, it looked so effortless overcoming a Paris Saint-Germain side that lost its cool and composure.

"Then they lost their nerve and started to kick us and it was good," Mahrez said. "They had the red card and after it was more comfortable for us."

It's been anything but comfortable for City getting a shot at lifting European football's top prize for the first time despite 13 years of lavish investment. Even reaching this semi-final required a fight in court to overturn a ban from this season's Champions League for breaching UEFA's financial rules.

And it's only two weeks since the Abu Dhabi-owned team exposed itself to fresh sanctions for joining a brief, ill-fated bid to split to form a breakaway European Super League.

Now City could win the competition they tried to leave in what could be an all-English final on May 29 in Istanbul if Chelsea overcome Real Madrid today after drawing the first leg 1-1.

PSG missed out on a second shot at lifting a first European Cup after losing last season's final to Bayern Munich, and Mauricio Pochettino's side is even struggling to defend the French title.

It's not just City that's endured frustration in its quest to win the biggest prize in European football. Pep Guardiola, a Champions League winner as Barcelona coach in 2009 and 2011, has been waiting a decade to return to the final. He fell short three times with Bayern Munich and has taken until his fifth season at City to even reach the semifinals.

"We are in the final of the Champions League - it's nice words," Guardiola said. "People believed what happened in the past means I should arrive in the final every year."