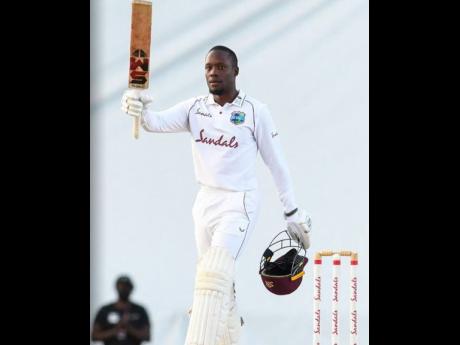 Jamaican Test cricketer Nkrumah Bonner and teammate Joshua Da Silva have been rewarded with central retainer contracts for the first time in their West Indies careers.

Newly appointed Test captain Kraigg Brathwaite has also earned a red-ball contract after previously missing out because of poor form, while the man he replaced, all-rounder Jason Holder, was the only player to retain an all-format contract.

In all, 18 players have been handed central retainers for the next year, starting July 1, down by four over the previous period.

"I am happy for all the players who have been offered retainer contracts for the upcoming period," CWI Director of Cricket Jimmy Adams said.

"Especially pleasing was the number of players who were awarded first-time contracts in recognition of their performances during the period under review.

"I know that the 11 players who have lost their international retainers will be striving and fighting hard to get back into the teams and earn their central contracts back next year.

"These players, along with our Twenty20 specialists, will ensure that we have genuine competition for places that will push everyone to attain higher standards of performance."

Bonner was one of the heroes of the Bangladesh tour, averaging 57 to end as Man of the Series, before hitting his maiden Test hundred against Sri Lanka in the opening Test last March.

He averages 62 in four Tests.

Da Silva made an encouraging debut last December on the tour of New Zealand when he replaced Dowrich for the second Test and struck 57 in the second innings.

He followed up by averaging 43 on the tour of Bangladesh before averaging 33 against Sri Lanka.

Mayers, a left-hander, emerged on the Test scene with an unbeaten double hundred on debut as West Indies beat Bangladesh by three wickets in the opening Test in Chittagong last February, after chasing down 395 on the final day.

He subsequently averaged 50 in the recently drawn two-Test series against Sri Lanka in Antigua, and currently boasts a Test average of 66 from tour matches.

Dowrich, who abruptly left the tour of New Zealand for personal reasons and has not played again since, joins batsman Shamarh Brooks in losing his red-ball contract.