Back to chasing French league for PSG 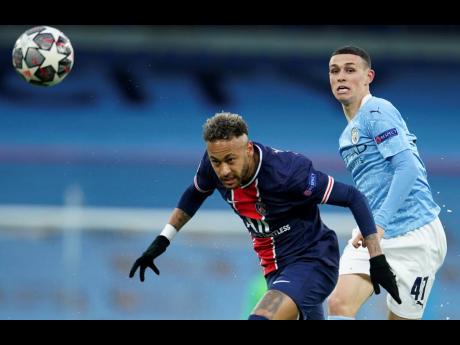 Another Champions League dream is over for Paris Saint-Germain and they're back to the reality of saving their French league title with only three games left.

The way PSG's players lost their composure against Manchester City on Tuesday night shows they remain prone to self-capitulation under pressure, and coach Mauricio Pochettino even had to calm them down at the final whistle.

Now he must get their minds fully focused for Sunday's game at Rennes as PSG try to wrestle the championship lead back from Lille.

For while defending champions PSG have won their past three games to move one point behind Lille, those wins were hardly convincing. PSG scraped home victories, thanks to a goal with just seconds left against Saint-Etienne and a glaring defensive error from Lens.

Neither of those sides really took the game to PSG, preferring to play on the counter-attack, but it promises to be a different proposition against a slick Rennes side who pass well at speed.

The Rennes players have been transformed under coach Bruno Genesio - the former Lyon manager - and the Brittany club go for a sixth win in eight games.

A lot is at stake, too, with Genesio's side pushing for fifth place and a Europa League spot after gaining ground on their rivals.

But seventh-place Rennes still need to make up two points on Marseille and fifth-place Lens, who could do PSG a favour by beating Lille at home on Friday.

Genesio's side have been displaying strong teamwork, which was hardly the case for PSG against City. Rather than pulling together as a unit, players took turns to rant at the referee.

Angel Di Maria got sent off for a petulant kick while Marco Verratti, a seasoned Italy international with 40 caps, again gave in to outbursts of rage.

Neymar has berated teammates rather than leading by example, failing to become the on-field saviour some observers expected him up to be.

There are also alarming questions regarding recent club decisions.

Striker Edinson Cavani, PSG's all-time leading scorer with 200 goals, and veteran defender Thiago Silva, a long-standing captain with 315 club appearances, were not given the contracts they wanted at the end of last season and left.

Both were genuine leaders in terms of attitude and work ethic, yet deemed not to merit more than a one-year offer because of their relatively advanced age.

Those decisions have backfired.

The 36-year-old Silva is through to the Champions League final with Chelsea - who are coached by Thomas Tuchel, who was fired by PSG mid-season.

Meanwhile, the 34-year-old Cavani was well poised to reach the Europa League final with Manchester United later on Thursday.

PSG are pushing Neymar to sign a new contract even though he has not justified the elevated hopes placed in him, and could also leave for free next year, having cost another fortune in wages.