Windies players, apart from Gayle, back in region from India 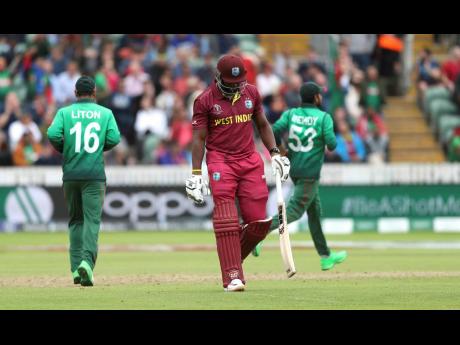 West Indies’ Andre Russell walks off the field after being dismissed during the Cricket World Cup match between West Indies and Bangladesh at The Taunton County Ground, Taunton, south west England, Monday June 17, 2019.

The West Indian players who were part of the Indian Premier League, minus Chris Gayle, are said to have reached the Caribbean from India following the postponement of the tournament due to the coronavirus outbreak in the biosecure bubble.

Cricket West Indies CEO Johnny Grave announced via WhatsApp message to STAR Sports, whereby he outlined that the players had left India, and only Chris Gayle is yet to arrive in the Caribbean.

"All of our IPL players are now safely back in the Caribbean, apart from Chris Gayle who has decided to travel back at a later date," said Grave.

Nine West Indian players had been involved with this season's IPL, including West Indies One-Day and T20 captain Kieron Pollard who plays for the Mumbai Indians, Jason Holder who was with the Sunrisers Hyderabad, Chris Gayle, Nicholas Pooran and Fabian Allen who played for the Punjab Kings, Dwayne Bravo with the Chennai Super Kings, Andre Russell and Sunil Narine with the Kolkata Knight Riders and Shimron Hetmyer who was part of the Delhi Capitals set-up.

STAR Sports further understands that Jamaican all-rounders Andre Russell and Fabian Allen have arrived in Jamaica and are under mandatory quarantine.

Both players, once cleared, are expected to fly back out on May 22 where they will meet up with their respective teams in the United Arab Emirates to take part in the Pakistan Super League, which is scheduled to resume on June 1.

It is also understood that the 'Universe Boss' Chris Gayle is currently in the Maldives while West Indies One-Day and T20 captain Kieron Pollard has arrived home in Trinidad on a special charter flight arranged by the Mumbai Indians franchise, which confirmed that all 14 foreign players have arrived home safe and sound.

The latest is welcome news for Cricket West Indies who had been monitoring the situation with the West Indian players who were in India during the devastating second wave of the pandemic which has already claimed 242,000 lives.

In the meantime, another IPL player has been confirmed to have contracted COVID-19. New Zealand wicketkeeper-batsman Tim Seifert, who was part of the Kolkata Knight Riders squad, is said to have failed both PCR test and will remain in Ahmedabad in isolation.