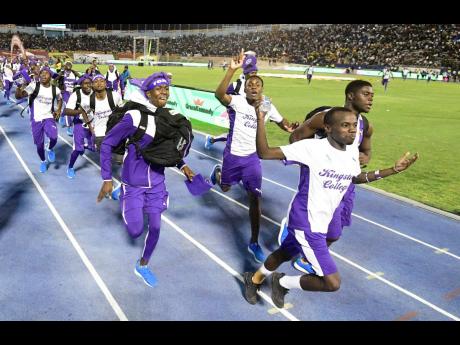 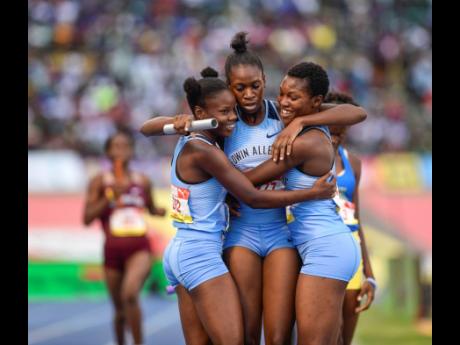 AFTER a year's absence due to the COVID-19 pandemic , the ISSA/GraceKennedy Boys and Girls' Athletics Championships will take centre stage over the next five days , starting today at the National Stadium at 9 a.m.

After enduring the cancellation of the meet last year, it has been an agonising wait for coaches and athletes as they feared the same might happen this year when a rise in COVID-19 cases forced the Government to halt sport in March. But the combined efforts of the Jamaica Athletics Administrative Association (JAAA) and the Inter-Secondary school Sports association (ISSA) have enabled the meet to be back on, much to the relief of the coaches and athletes.

Unlike previous years, things will be different this time as there would be no spectators inside the National Stadium to cheer on their favourite schools, and the number of participants have been greatly reduced to just over 900 athletes. This is, in part, a result of the qualification process adapted this year. A huge number of events are down to two rounds instead of the usual three.

Today there will be 16 finals to be decided with 10 among the girls and six among the boys.

Defending boys champions Kingston College, who are strong in the hurdling events, are expected to take the early lead and head coach Leaford Grant in an interview with STAR Sports stated that his team is ready to defend their title." Preparation for us over the past few weeks have gone well and the boys are ready to give of their best and as usual we expect to see the same true fighting spirit of Kingston College," he said.

Many time champions Calabar High School are also ready to fight. "Our preparations have not been the same due to pandemic and I expect an intense Championships for points and like any of the other top teams we do have a chance at the end to win the title," said veteran coach Michael Clarke.

But Jamaica College have never been better positioned to to end their 22nd title best position and manager of the team Andrew McCrae is very optimistic about his team's chances.

"Despite the COVID pandemic, we were lucky at Jamaica College as our boys had been in a bubble since September and because of this we were able to keep them in training for a longer period, unlike prior years when boys will miss out on training and we were able to maximise the talent of the team. We expect to be in the hunt when this Championships is decided as this team is talented and well-rounded, " said McCrae, who singled out the strength of their middle-distance athletes in all classes.

But they will have to play catch up as the defending champions look set to dominate today's first day of these championships. Analysts expect them to win four of the six finals on with most of their points coming in the sprint hurdles where former St. Jago High star Vashaun Vascianna with a season best 13.23 seconds is expected to lead from front.