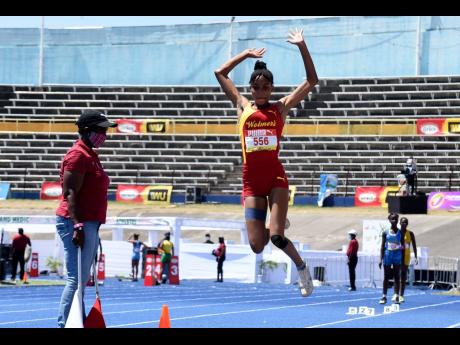 Wolmer’s High School’s Natrilia Campbell launches herself into the sandpit during the Class Four Girls long jump event at the ISSA/GraceKennedy Boys and Girls’ Athletics Championships at the National Stadium yesterday.

Having suffered an injury at the ISSA/GraceKennedy Boys and Girls' Athletics Championships (Champs) on Tuesday, Wolmer's Girls' Natrilia Campbell was concerned about her chances of capturing the Class Four long jump title yesterday. But she was no less determined to make sure she had a say where the medals went.

In the end, Campbell's third attempt of 5.42m was enough for her to win the title and secure the first gold medal for her school for 2021.

Additionally, she snatched the title away from the competition favourite, Edwin Allen's Toniann Allen, who had the longest distance, 5.55m, coming into Champs. Allen could only manage to finish third with 5.22m, which she earned on her first attempt.

St Catherine High's School Rihanna Chambers finished second with a fourth attempt of 5.40m. The wind played a factor in the proceedings as Campbell's winning distance came in a positive 4.1m per second wind.

Campbell said that the win was satisfying and rewarding given that she was not at 100 per cent.

"Well right now I am really happy because with my injuries and all, I didn't expect to win the gold," she told STAR Sports. "But I did expect to come home with a medal, which I achieved today, and I am really excited about it.

Campbell carried injuries to her left knee and right thigh in the aftermath of the Class Four 70m hurdles final on Tuesday, in which she finished fourth in a time of 11.24 seconds. Entering the long jump final, she had the fourth longest distance among the challengers. But Campbell said that despite the injury concerns, nothing was going to stop her from earning a medal in her pet event.

"There was an inflammation under my left knee and on my right thigh there is a big bruise," she said. "[But] I had my mind set to do it and I was not planning to back down at all. Long jump is one of my favourite events and I love it with all my heart and I am really dedicated to it."

Campbell led from the start with a first attempt of 5.24m. While Allen was in the thick of it with her first attempt of 5.22m, she didn't improve on that mark, only mustering a 5.10m on her second attempt, before having two attempts at 4.98m. Her lowest mark was 4.71m, fouling on her final attempt.

Campbell hopes the same dedication and drive that led her to the title will serve her well in competing for a spot on the national team set to compete in the World Under-20 Championships in Nairobi, Kenya, in three months.