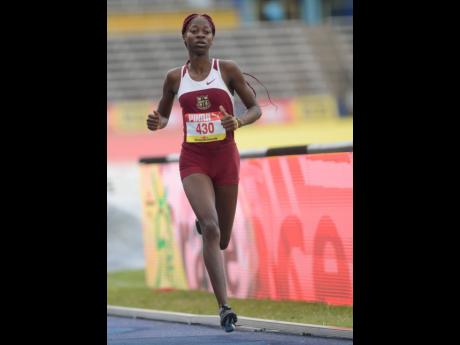 Believe it or not, Holmwood Technical High School haven't won the ISSA/GraceKennedy Boys and Girls' Athletics Championships (Champs) Class One Girls' 400m since 2008. The drought could end on Saturday because the school's two-time Class Two winner Daniella Deer is heading into the meet in good shape. Holmwood head coach Dave Anderson says Deer is ready.

In an assessment of Deer's form and fitness, Anderson said, "Was disappointed with her Central Champs, thought she ran a poor race, but I've seen in training that she's in good shape. It's a matter of her executing properly to get the right result, but she's okay; she's healthy, didn't have any injury all season. She's being prepared to do the double as usual, so I'm hoping she will deliver, as we are expecting her to deliver."

The other half of the double the coach spoke about is the 800m, where Deer has a silver and a bronze from Class Two.

Also in the Champs medal picture is Hydel's Garriel White, who clocked 54.20s earlier in the season.

Anderson reckons his 2018 Carifta under-18 runner-up will bring the title back to Holmwood, despite the quality of 2017 and 2018 Class Three champion Reid and the consistent White.

"She's a winner, and I think she has very good competition out there; so she will have to take her best race to actually win the race, which would be a personal best," he predicted.

"I am confident and I trust the training," she said. "I am strong-minded that I'm going out there to do my best, and to get a gold medal."

Third to Reid and White in the 2017 Class Three final, Deer is looking forward to racing her old rivals one last time at Champs.

"Well, it will be great," she said. "I've been waiting for this from last year, so it will give me a next chance to see where I'm at right now, and I am ready and I'm up for the fight."