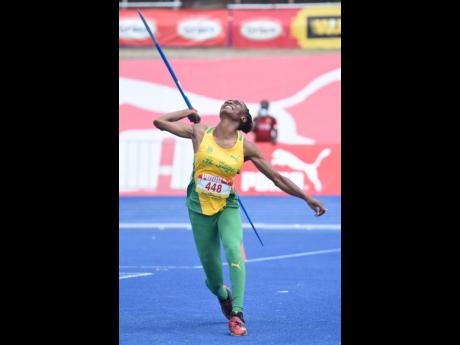 St Jago High School’s Latavia Galloway in action in the Girls Javelin Open final at the ISSA/GraceKennedy Boys and Girls’ Athletics Championships at the National Stadium on Thursday.

St Jago High School's Latavia Galloway, for all her efforts, could not hit the 40m in the javelin throw this season, and throughout the final at the ISSA/GraceKennedy Boys and Girls' Athletics Championships (Champs), it seemed that the same frustrations that met her 2019 would return.

But Galloway managed to break the 40m barrier for the first time all season, on her third attempt, throwing a distance of 41.95m, a personal best (PB), to win gold in the event, improving on her third-place finish in 2019.

"I'm just overwhelmed because I had issues in 2019 boiling back from not hitting 40m in previous championships, and coming during this season I was wondering, 'Would I get back the 40m?'," Galloway said. "But I just prayed and had my hopes up and I give God all the praise and glory for giving me the 40m."

Galloway qualified for the javelin final two years ago, throwing 40.31m in the preliminaries but never got close to the 40m barrier in the final, settling for third place with 37.22m. And during the 2021 season, the same pattern was unfolding as she entered Champs with a season's best of 37.96m.

It was a concern that Galloway said affected her confidence.

"I was doubting myself because I was saying that I couldn't get it back (to 40m) and I would be one of those athletes who would get a PB and then train hard and lose everything from that," she said.

But those fears have been lifted with the performance, one that she got to share with her teammate Alves, which she said made the moment special.

"Having my teammate behind me right throughout is one of the [best] feelings that I can ever have competing," she said. "In 2019, I had Jewel Collins right behind me just the same, and now I have Jamora.

"She is new to the javelin and I just have to commend her because she is a very hard worker, and in spite of her injury, she did exceptionally well."