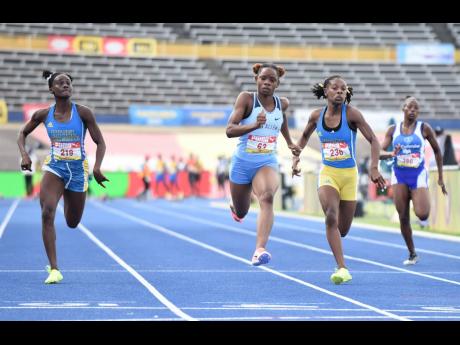 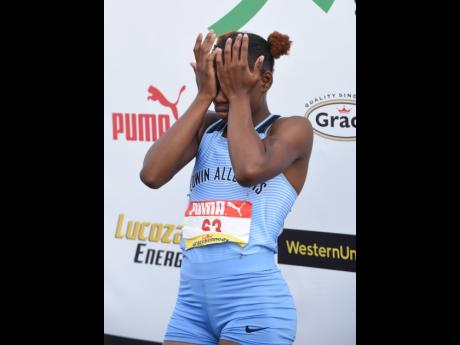 Edwin Allen’s Tina Clayton is grief-stricken despite winning the Class Two Girls 100m final at the ISSA/GraceKennedy Boys and Girls’ Athletics Championships at the National Stadium on Thursday. This is because her twin sister Tia, whom she was expected to complete the one-two with for her school, was disqualified after a false-start.
1
2

In an ideal world, a podium finish for the Edwin Allen sister tandem of Tina and Tia Clayton in the Class Two Girls 100m final at the ISSA/GraceKennedy Boys and Girls' Athletics Championships (Champs) would have been the perfect birthday present for their mother on Thursday.

While Tina did claim victory in the final in a time of 11.38 seconds, her twin sister Tia did not get the opportunity to run at all. A false start disqualified Tia from taking any further part in the final, increasing the pressure on Tina to ensure that Edwin Allen won the race and take crucial points as they continue to strengthen their lead atop the girls standing.

Hydel High School managed to complete the podium places as Kerrica Hill and Alana Reid finished second and third with times of 11.61s and 11.65s, respectively.

The victory was bittersweet for Tina who was fighting emotions after the race, discouraged that her sister did not cross the line with her. Tina said that because of Tia's difficulties with her start, she may have been hoping to get an early advantage.

"I'm a bit disappointed," Tina told STAR Sports. "I know that she is not a good starter. Maybe she was just trying to get the start, but somehow she just came out a bit took quickly. She got disqualified but I just came out to deliver and execute."

The Claytons entered the final with the top two fastest times among the eight-person field, Tina clocking 11.69s and Tia with 11.71s.

Michael Dyke, their coach, says Tia has already placed the disappointment behind her.

"She has already recovered," he said. "It was truly disappointing for her, but we were able to quickly help her to recoup and she is okay now."

Both Tina and Dyke are confident that Tia will be able to redeem herself in the 4x100m relays on Saturday as Edwin Allen push towards a seventh consecutive girls title.

"Well I know that since she false-started in the 100m, that she will deliver in the relay," Tina said.

The Claytons' last outing in a 100m at Champs was the Class Three final in 2019. Tina, who won that race, was also disappointed at the finish saying that she wanted Tia, who was second, to win. Tina's plan was for victory in the Class Two 200m final the following day. However, that race was won by Tia.