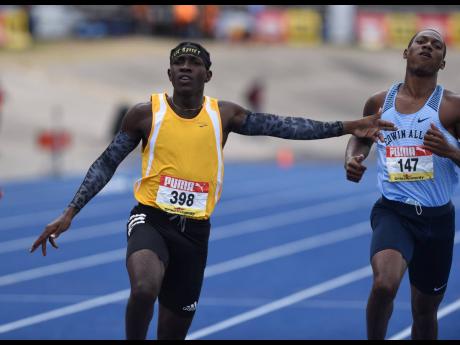 Antonio Watson from Petersfield High School (left) celebrates after winning the Class One boys 200m final at the ISSA/GraceKennedy Boys and Girls’ Athletics Championships at the National Stadium on Saturday, May 15, 2021. 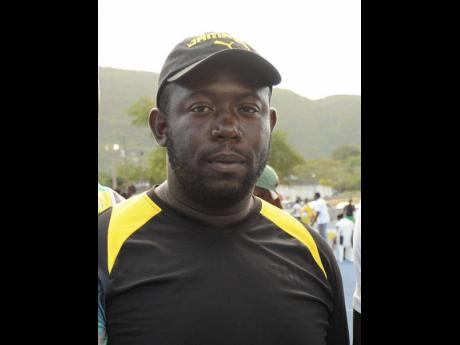 Principal of Petersfield High School, Rohan Green, and Head Coach Machel Woolery have described Antonio Watson's 'gun finger' celebration, during the Class One Boys 200 metres final at the ISSA/GraceKennedy Boys and Girls' Athletics Championships at the National Stadium on Saturday, as excessive. They also noted that discussions will continue with the youngster in the face of widespread criticism.

The final year student has been facing heavy backlash on social media, after he pointed his fingers in a manner resembling a gun at another competitor, Bryan Levell, and mimicked firing shots in his direction, as he crossed the finish line, after overtaking the Edwin Allen athlete and beating him to the gold medal.

Watson continued his celebration after the race with a dance move, before walking over to embrace Levell.

Woolery admitted that his charge's controversial celebration crossed the line, but believes he was just playing around and meant nothing personal.

"I don't have a problem with celebration, sometimes they go a little bit too far. In terms of the finger-pointing, I think that was a bit excessive. However, the fact that after the race he went and hugged the young man, it shows that he was just playing around. Because of that, I didn't knock him too hard about it when I spoke to him about it," said Woolery.

"I talked to him about his actions and the consequences of his actions ..., " he added, before describing the occurrence as an isolated incident that should not be used to judge the young man.

"I looked back at it and feel a way about it because the comparisons and image of gunman-ism, he does not want to be associated with. Because of that, I know that it won't happen again," Woolery added

Meanwhile, Green said he understands that Watson was caught up in the moment, but warned that the school could not accept or support the gesture.

"As a school it's not something we support, pointing a gun finger. However, in the midst of the celebration, I would imagine that he was very elated having missed out on the 100m title. I don't think anywhere in the education fraternity, such a gesture can be supported or accepted. We plan to have a meeting with the team tomorrow (today) when they come back to school to evaluate the entire programme and of course, that will be top of our agenda," said Green, who also see it as a teachable opportunity.

"It was actually surprising as it's unparalleled to how he normally behaves. It's not something that we have ever seen him do before. It's something that we will discuss with him and take it from there in terms of counselling. He is young and we have to keep him on the right track and it's also an opportunity for the youngsters behind him to learn from, because he is the team captain."

Known for his personality on the track, Watson's other stand-out celebration at Champs 2021 also went viral, after he mimicked gearing down in a motor vehicle, after cruising to the finish line with a big lead over his rivals in the 200m heats last Tuesday.