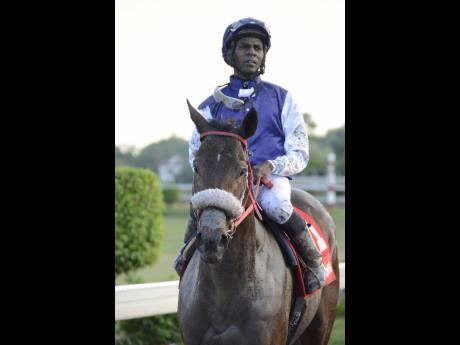 IT'S hard not to back ROJORN DI PILOT in today's overnight allowance at five furlongs straight after his encouraging second-place run behind out-of-class SIR ALTON when reporting off a near six-month lay-up on April 19.

Making his first start out of Ian Parsard's barn, ROJORN DI PILOT was easily second-best to the importee, who has matched strides and beaten the best horses in the country. Though it was a surprisingly good run from the former Wayne DaCosta-trained runner, reporting off a lengthy break, he was always a crack five-straight runner, especially in the hands of Omar Walker.

Getting a plumb draw on the stands' side, ROJORN DI PILOT couldn't have asked for a better stall, which should put him well clear entering the main track with the course bias to his advantage inside the last furlong. In placing second to SIR ALTON, ROJORN DI PILOT easily slid into second position behind the foreigner after initially chasing MR UNIVERSE for the first two furlongs.

With too many horses who appear to have bounced form in the line-up, the likes of GOD OF LOVE and LABAN, ROJORN DI PILOT's run off the lay-up should be sufficient to take out EAGLE ONE, who scored an easy six-length win at six furlongs on April 30.

EAGLE ONE was slowly into stride but still managed to put away BIG BIG DADDY and WEEKEND JAZZ, not entirely horses with best form. Though he has useful speed, United States-bred EAGLE ONE has never proven himself a terrifying straight-course runner unlike ROJORN DI PILOT, who runs his best races at the distance.

RAS EMANUEL and SIR KEL are the other proven five-straight runners in the line-up. However RAS EMANUEL hasn't raced since October and was scratched, lame, late that month not to be seen at the races since.

SIR KEL has speed and has a good draw but doesn't like company on the lead. His winning time on last was a modest 1:01.0, beating NEVADA and STANISLAUS in $550,000 claiming, way below the million-dollar tag on which he now races.