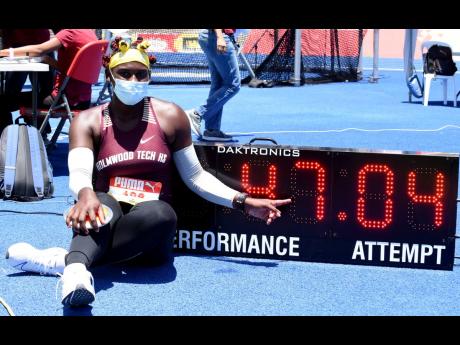 Cedricka Williams (Holmwood) celebrates her record discus throw of 47.04m, to win the girls Class Two discus event at the ISSA/GraceKennedy Boys and Girls’ Athletics Championships, held at the National Stadium on Wednesday, May 12, 2021. 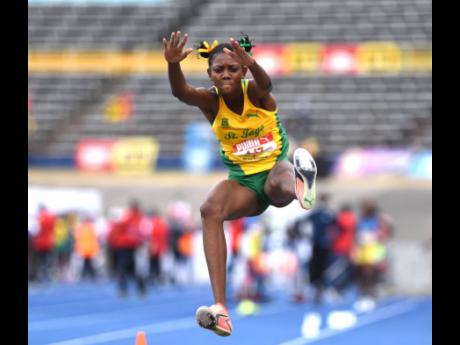 St Jago’s Shantae Foreman leapt to victory in the Class One long Jump competition at the ISSA/GraceKennedy Boys and Girls’ Athletics Championships inside the National Stadium on Saturday, May 15, 2021. 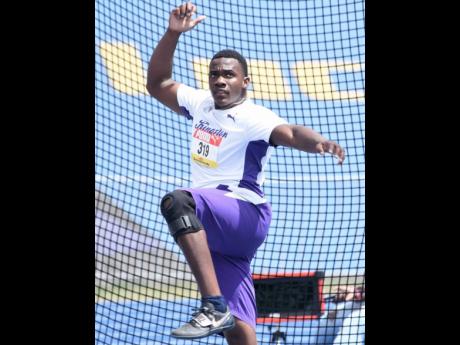 With the likes of Shanieka Rickets, Kimberly Williams, Daniel Thomas-Dodd, O'Dayne Richards, and Fedrick Dacres mining medals at the highest level for Jamaica in field events over the past several years, there were signs at the just-concluded ISSA/GraceKennedy Boys and Girls' Athletics Championships that Jamaica's future in this area is in good hands.

Leading the way among the impressive junior performers was St Jago High School jumper Shantea Foreman, who delivered a remarkable double in Class One for her new school.

Foreman, who dominated in both the high and long jump events in all classes during her time at Excelsior High School, carried over that form to St Jago, winning the high jump with a 1.84m clearance and the long jump with a distance of 6.43m.

Those performances put Foreman at the number two and three positions, respectively, among Jamaican athletes.

Foreman's marks also place her fifth in both events on World Athletics' Top List for athletes under 20 years old.

Smith is also second among her peers on the World Athletics Under-20 Top List.

The other outstanding field events performances on the female side came from Hydel High School's Shemonique Hazle, who won the Class Three long jump with 6.00m.

Kingston College's Ralford Mullings led the way among the males.

Mullings, who is ranked number three on the World Athletics Under-20 Top List in the discus, produced a winning throw of 61.92m to capture the Class One event at Champs.

St Jago also had two big performances in the field among the boys through Shaiquan Dunn and Javar Thomas.

Calabar's Kobe Lawrence was also outstanding in winning the Class Two shot put, with a 19.00m effort, with his teammate, Luke Brown, who won the Class One triple jump with a wind-aided 16.31m, also registering an encouraging performance.