Bolt stands up for Watson 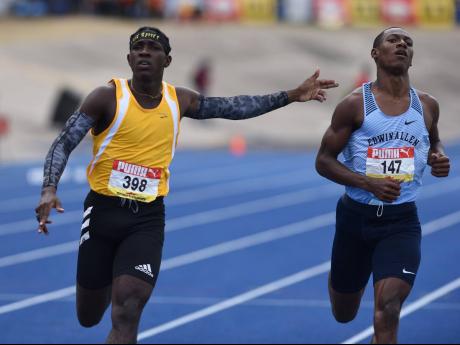 Petersfield High School’s Antonio Watson (left) celebrates with a gun play gesture towards Edwin Allen High School’s Bryan Levell as he crosses the finish line ahead of him in the Class One 200m final during the ISSA/GraceKennedy Boys and Girls’ Athletic Championships at the National Stadium on Saturday. 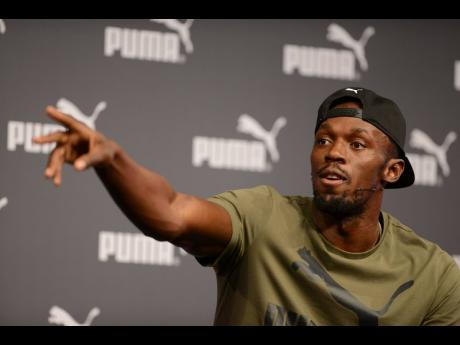 The Petersfield High School athlete has been facing heavy criticism for his 'gun finger' gesture to celebrate his victory in the event last Saturday.

Watson pointed his fingers in a gun-like manner across at Edwin Allen High School's Bryan Levell, whom he had to chase down and pass to win the race. Watson then pretended to fire at shot at Levell as he crossed the line in 20.74 seconds.

The incident sparked national attention and many have even called for Watson to be stripped of his medal and or face another form of sanction.

Bolt, the eight-time Olympic gold medallist, also faced similar backlash after beating his chest as he crossed the line to win the men's 100m final at the Beijing Olympics in 2008. He called for understanding and guidance for the youngster on his Instagram page yesterday.

"People, don't condemn and chastise young Antonio Watson," he said. "It is important to mold such young talent so he can develop to maximise his full potential.

"Reason with him, yes, about his actions, but don't crucify him. It is a learning lesson and a teachable moment for all.

"Youths, be strong and remember anything is possible. Don't think limit."

Watson has since apologised for the moment of controversy.

"I therefore want to unreservedly apologise to all the stakeholders, my school, fans, and family for my actions," he said.

"I have taken full responsibility for such actions as it is in no way a reflection of the ethos of my school, the principles of my coach or the position of ISSA or any of the sponsors.

"Upon reflection, I recognise that my gestures could have been misleading and I have no desire to negatively influence others. In fact, going forward, I aspire to demonstrate positive behaviours and attitudes that will inspire countless young Jamaicans to strive for excellence and make our country a true beacon of what is good in this world."

Watson, like Bolt, is known for his colourful on track personality and showmanship. In his 200m first-round heat, he pretended to be gearing down in a motor vehicle, metres before crossing the finish line with a big lead over his competitors. The incident went viral.