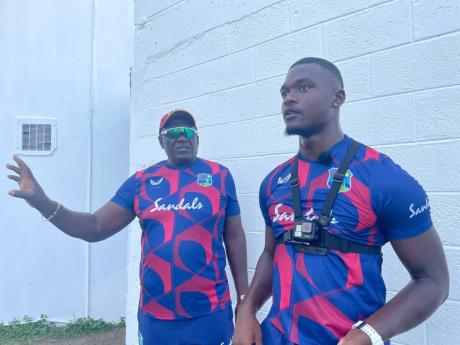 He may be only 19 years old, but Trinidadian fast bowler Jayden Seales looks the quintessential pacer, despite having only one first-class game under his belt.

Seales, who was named in the West Indies 13-man squad for the first Test against South Africa starting tomorrow, could be in line for a Test debut, and follow in the steps of Jamaican Jerome Taylor as another fast bowler who made his Test debut as a teenager.

Ironically, Taylor made his debut against Sri Lanka at age 18 at the same venue where the first Test against South Africa will be played.

In that game, Taylor went wicketless in the two innings, however, Seales will be hoping that if he gets the nod, his impact will be even greater, after dreaming of the moment.

"It's a dream come true to be in the set-up. Being in the final 13 was a goal of mine, and it's just a matter of me now hoping that I get to play in the first Test match and do my best for the team," said Seales.

An injury to senior fast bowler Shannon Gabriel may have fast-tracked Seales' involvement in the Test side, however, the lead selector Roger Harper pointed out that the former West Indies Under-19 speedster has been sharper than most in the nets and also in the recent 'Best vs Best' four-day intra-squad practice match.

"Jayden Seales is young, very enthusiastic and has a big heart. In the 'Best v Best' matches, he bowled with pace, got movement and has displayed the ability to take wickets. We think he is capable of adding potency to the bowling attack."

With speeds consistently in the 140 kilometres per hour, the right-hander has been compared to South African pacer Kagiso Rabada, who he may face come Thursday.

Seales says he wants to make his mark and put his stamp on the international game, despite the comparison, and the right-hander is confident that he can deliver on the big stage.

"The nerves haven't kicked in just yet, probably on the day. I might get a few butterflies but, as of now, it's just to continue the hard work in training and make sure everything is in tune," Seales said.