Blackwood’s goal does it for Girlz 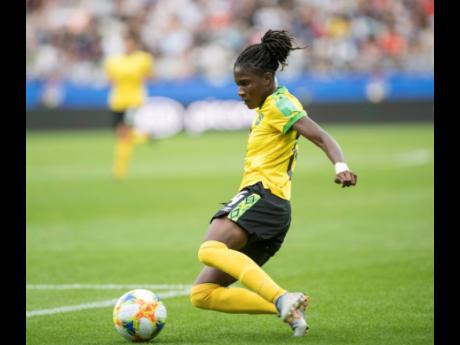 The national senior women's team defeated Nigeria 1-0 in their international friendly yesterday at the BBVA Compass Stadium in Houston, Texas.

Denisha Blackwood scored the only goal of the game in the 51st minute as the Reggae Girlz marked their competitive return with a win after more than a year of inactivity because of the COVID-19 pandemic. The starting eleven consisted of a number of players who featured in the 2019 Women's World Cup campaign with three players, goalkeeper Rebecca Spencer, striker Shania Hayles and defender Vyan Sampson, making their international debuts.

Jamaica had a great chance in the first half to take the lead when a penalty was awarded in the 24th minute as striker Jody Brown was fouled in the box by Nigerian defender Glory Ogbonna. However, Blackwood's effort was comfortably saved by Nigerian goalkeeper Tochukwu Oluehi. The miss did not deter the Jamaicans as they had another chance minutes later as Brown played the ball through to Konya Plummer whose shot was saved by the onrushing Oluehi. Nigeria's Francisca Ordega had her chance minutes before halftime but her deflected shot from the resulting corner hovered on the goal line before Jamaican goalkeeper Rebecca Spencer caught it. Ordega claimed that the ball crossed the line but the referee ruled no goal.

Nigeria thought they had taken the lead early in the second half when Amarachi Okoronkwo placed her shot by Spencer after being put through on goal by Vivian Ikechukwu. However, the goal was ruled out as Okoronkwo was offside when the ball was played to her. Blackwood made Jamaica's chances count in the 51st minute as a delivery from substitute Olufolsade Adamoluken went all the way to Brown on the left-hand side and her pass found Blackwood whose one-time effort gave Oluehi no chance.

Nigeria's best chance of the second half came less than 10 minutes before full time when substitute Michelle Alozie's long-range effort hit the post.

Jamaica will next play World champions the United States in the second game of their international series on Sunday in Houston.