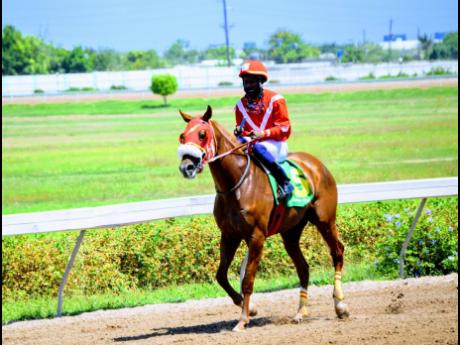 EXCESSIVE FORCE with Linton Steadman aboard.

AMBUSHED by 16-1 outsider EAGLE ONE in what was anticipated rematch on May 25, United States-bred EXCESSIVE FORCE and imported-in utero DOUBLE CROWN lock horns at a mile in Saturday's Alsafra Trophy with nothing to separate them in the nine-horse field.

Both runners had valid excuses on May 25. Though EXCESSIVE FORCE's habits are starting to annoy, slowly into stride and wide at the quarter bend, beaten a length by decent runners in his last two starts, gives the foreigner a bye in the Alsafra.

Meanwhile, DOUBLE CROWN, returning off what couldn't have been a voluntary four-month lay-up, didn't train like a horse prepping for an overnight allowance clash, eventually finishing fifth, racing evenly throughout but never a threat.

However, DOUBLE CROWN was cheekily entered as a filler for stablemate FATHER PATRICK at six furlongs in Monday's Lady Geeta, competing 14lb overweight against open allowance company. Though almost half the field was nothing to write home about, DOUBLE CROWN stayed on to finish third behind FATHER PATRICK and EROY, posting a time of 1:14.0.

Technically, having finished third by a length behind EAGLE ONE and ANOTHER BULLET on May 25, EXCESSIVE FORCE would have 'won' his rematch with DOUBLE CROWN, who had beaten him by almost six lengths when winning at seven and a furlongs on December 23.

Again, an excuse must be made for EXCESSIVE FORCE's December 23 loss, making his fourth start compared with DOUBLE CROWN's eighth appearance, having raced against the best classic runners for the entire season.

Though DOUBLE CROWN returned to win his follow-up event, putting away ANOTHER AFFAIR on January 23, the filly, who had a rough classic campaign against the colts, finishing third in the Jamaica Derby, ran her last race that day. She has now been retired to the breeding shed.

DOUBLE CROWN's absence and form since that questionable victory puts a major blot against him in a third meeting with EXCESSIVE FORCE, who has shown that he is capable of magical performances but only needs to settle down and not blow the turn.

The scale is also woefully against DOUBLE CROWN, coming in at 126lb against Oshane Nugent's claim bringing the foreigner down to 116, a 10lb difference which will equate to a ton in the stretch run.