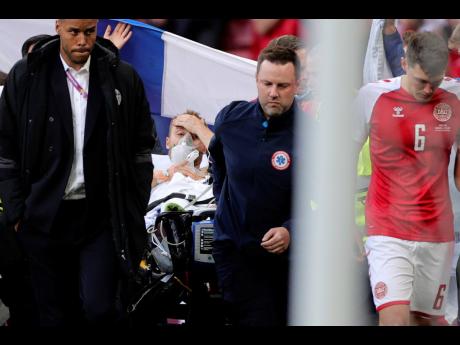 Paramedics using a stretcher to take Denmark’s Christian Eriksen off the field after he collapsed during the Euro 2020 Group B match between Denmark and Finland at Parken stadium in Copenhagen, Denmark, last Saturday.

UEFA has defended itself from claims Denmark players were put under pressure to resume their European Championship game against Finland after Christian Eriksen collapsed on the field.

UEFA says it's "sure it treated the matter with utmost respect for the sensitive situation and for the players."

UEFA announced the game in Copenhagen last Saturday would restart after a 90-minute stoppage "following the request made by players of both teams."

Schmeichel says the players were given options to resume, come back on Sunday at noon, or forfeit the game as a 3-0 loss.

UEFA says "the players' need for 48 hours' rest between matches eliminated other options." Yesterday Patrik Schick scored his second goal from near the halfway line to give the Czech Republic a 2-0 victory over Scotland at the European Championship.

Scotland lost possession in their half and the ball fell to the Bayern Leverkusen forward. He spotted opposing goalkeeper David Marshall off his line and launched a curling shot that bounced into goal in the 52nd minute.

UEFA says it was the longest distance for a goal in the tournament at 49.7 metres. The previous record 38.6 metres came from Germany midfielder Torsten Frings at Euro 2004.

Schick earlier gave the Czechs the lead in the 42nd minute with a powerful header after he muscled himself between two Scotland defenders.