Windies to do without batting coach until T20 series 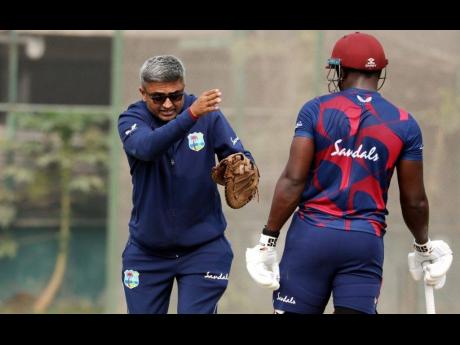 The West Indies team will have to work out all their batting kinks without batting coach Monty Desai, as the Indian will not be able to join the team until just before the T20 series.

STAR Sports understands that Desai has been having difficulties getting to the Caribbean from India, due to restrictions on travellers from that country.

Desai, who joined the West Indies coaching staff in 2019 on a two-year contract, has been credited with helping to improve the batting of a number of the West Indies players namely, Nkrumah Bonner, Kyle Mayers and Joshua Da Silva.

His absence in the first Test against South Africa proved to be crucial, as the side failed miserably with the bat in both innings (97 and 162) and failing to get past the 200 mark in either innings against a potent Proteas attack.

The 259-run aggregate score at the Daren Sammy Stadium was their second lowest in a home Test after being bowled out twice.

Their 218 runs scored against Australia in 1999 in Port of Spain was their worst ever effort.

Last weekend's performance was in stark contrast to the previous series, where the West Indies batters scored over 350 plus runs against Bangladesh and Sri Lanka and getting over 400 on one occasion.

Only Roston Chase, with a fighting 62 in the second innings, put up any real resistance, but captain Kraigg Brathwaite was adamant that Desai's absence wasn't the root cause of the team's poor showing with the bat.

Head coach Phil Simmons has had to pull on the assistance of coaches Andre Coley, Roddy Estwick and Rayon Griffith to help with preparations.

When the question was asked if the former Afghanistan and Canada coach's absence affected the teams batting, Simmons had this to say.

"I don't know, the players would have to answer that one, but it's a case that we try to coach in a way that we don't always have to tell you (players) what to do. If I am not there or Roddy or Monty, you still know what to do so that is not our coaching style to keep telling you what to do," said Simmons.

Following the second Test which starts on Friday, the West Indies are set to engage the South Africans in a five-match T20 series starting on June 26 in Grenada.