We can outbowl South Africa – Roach 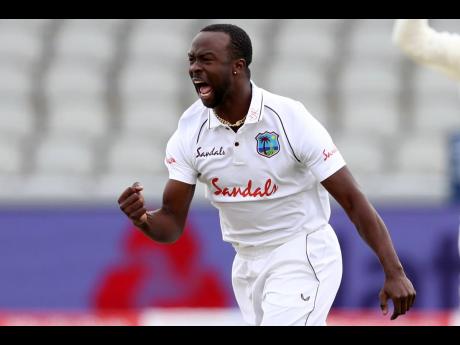 On the eve of the start of the second Test, West Indies fast bowler Kemar Roach says his side can outbowl the South Africans when the sides meet in the second and final game of the series at the Darren Sammy National Stadium in St Lucia.

The South African pace attack has been marauding so far with their top three fast bowlers leading the wicket-taking chart. Anrich Nortje is at the top with seven wickets with Kagiso Rabada snaring six and Lungi Ngidi five.

All-rounder Jason Holder has been the best West Indian so far with four wickets, while debutant Jayden Seales picked up three wickets on debut. Roach picked up two wickets in the 20 overs he bowled.

With the home side expecting Trinidadian fast bowler Shannon Gabriel and Antiguan pacer Alzarri Joseph to vie for a place in the starting XI for the second Test, Roach says they can outshine their opponents in the final contest.

"I think we have enough experience in the dressing room," he said. "I, Jason and, hopefully, we can have Shannon around with Jayden, showing maturity and Alzarri in the fray as well. I think once we get our plans right, remain patient and execute as well as we have been doing for the last two years, I don't see why we can't outbowl the South African team."

Been the trump card

With the experienced Gabriel missing the first Test with an injury, Roach would have been the trump card leading the West Indies attack.

"Everyone can't get wickets every day, it's cricket we are playing," Roach said. "I have never bowled well every day, it's impossible. I thought I bowled pretty well up to the stage of 222 for eight."

With the team's batting unit still a major concern after back-to-back low scores, Roach says the team has been having their meetings and working on their plans to counter the South African attack, which will be offering more of the same tomorrow.

"The dressing room is pretty good and relaxed," he said. "We have had a good year of Test cricket and one match doesn't make us a bad team. It's about remaining positive and trusting our process and gaining some confidence from the second Test match and taking it from there."