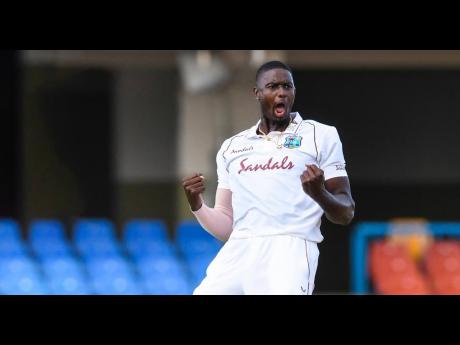 Top-ranked Test all-rounder, Jason Holder, believes his preparation for the two-Test series against South Africa was ideal, despite missing the month-long high-performance camp in the build-up to last weekend's opening Test.

The 29-year-old was rested by selectors prior to the game due to his recent heavy workload which saw him feature in all three formats against Sri Lanka in March and April, and then also turn out in the Indian Premier League (IPL) for Sunrisers Hyderabad immediately afterwards.

And even though conceding he did not start well with the ball, he said the way he hit back to take four for 75 was indicative of his preparation.

"I didn't feel undercooked whatsoever," said Holder, who was replaced as Test captain by fellow Barbadian Kraigg Brathwaite for the Sri Lanka series.

"I struggled with my rhythm bowling in the first innings and it's mainly [because] I struggle all the time here in St Lucia, just due to the fact that the square itself is a little bit more elevated than the actual playing field.

"So there's actually a little incline just before you look to deliver the ball ... and I've struggled here with my rhythm over the years."

He added: "I was really pleased with the way I came back on day two after my day one bowling spell but I don't put it down to preparation, I think my preparation has been good.

"I've played enough cricket now to know what I have to do to be ready for any game."

Holder went wicket-less on the first day but was the home side's leading bowler on day two, getting the only wicket to fall before lunch and then snapping up three of the last five South Africa wickets to fall.

The match was his first competitive one in almost four weeks, having previously played a single IPL game back in mid-April.

But Holder said even though he was a little more expensive than normal, he had also bowled during difficult stages of the contest.

"I felt mentally prepared, physically prepared ... but when you look at my statistics of my performance, maybe my RPO (runs per over) was a little bit higher than normal," he noted.