I want to win trophies – Shaw 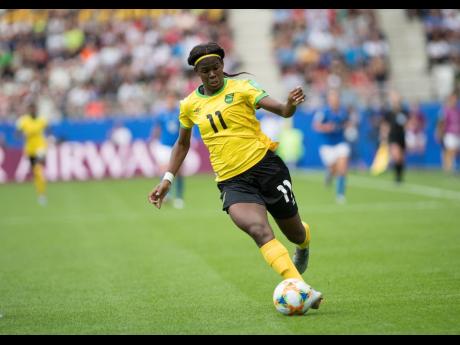 National striker Khadija Shaw says that her move to English Women's Super League club Manchester City not only represents an opportunity to further elevate her game but her ambition for silverware.

Manchester City announced the signing of Shaw, 24, yesterday on a three-year deal pending her work visa and international clearance. Shaw's move comes after a strong season in France with Bordeaux where she finished as the league's top scorer with 22 goals.

In an interview with the BBC yesterday, Shaw says that she is focussed on helping the team to satisfy its demand for silverware next season.

"I want to achieve everything there is, whether that means winning the Champions League or the league title. I just want to compete at our best at all times. I know it will not be easy but with the motivation and dedication that we hope to put in, then it will be easier," Shaw said.

National assistant coach Xavier Gilbert, who expressed delight over Shaw's latest milestone, says that the club is getting a quality player whose goal-scoring abilities will be a major asset to their attacking line-up.

"Man City are getting a fantastic player, who works hard and takes her craft seriously," Gilbert told STAR Sports. "She is very strong physically, has good speed and has a knack for goals and will score goals from anywhere."

It is a sentiment that is shared by her new club's head coach Gareth Taylor, who says that Man City will be the best place for her to continue her development.

"She's a very talented young player and we're pleased that we've been able to add her to our already productive forward line," Taylor told the club's website. "She's enjoyed a successful couple of years in France with Bordeaux and the fact that she finished as the league's top scorer this past campaign speaks volumes about the calibre of player that she is."

Gilbert says that while there will be an adjustment period for Shaw in England, he anticipates that she will adapt quickly to the standard of the league, similar to how she adjusted in her first season in France, where she scored 10 goals during the 2019/20 campaign.

She has scored 32 league goals during her two years with Bordeaux.