No approval yet for ball boys at JPL matches 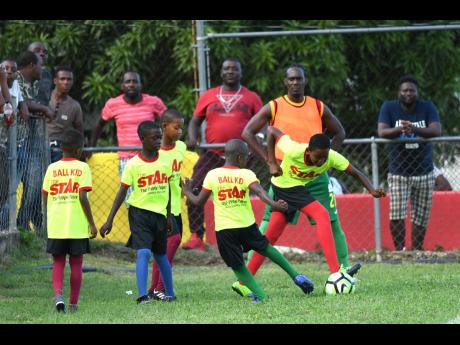 Ball Kids play during the half-time break of a local Premier League encounter at the Effortville Community Centre on Sunday, October 21, 2018.

With the Jamaica Premier League (JPL) set to begin in just more than a week's time, chairman of the competition, Christopher Williams, said they are yet to receive approval from the Government for the use of ball boys.

The JPL is scheduled to return on June 26 after a 14-month absence, due to the COVID-19 pandemic.

"We are still trying to get approval for that," said Williams. "You know that everybody that goes into the stadium must get approval and so we are working on it," he said.

He added that his organisation will be having a meeting to discuss this matter along with other issues surrounding the competition.

"Having these boys at the matches keeps the games moving and it also maintains the pace and the entertainment value and so we can't play without them and so we are proceeding as if we will have the ball boys," Williams said.

However, while acknowledging the importance of the ball boys to the speed of the game, the sporting director of Cavalier, Rudolph Speid, said the JPL should look to make a lot more balls available around the field if they fail to secure the services of ball boys.

"I think that can solve this problem if the ball boys are not available and instead of having five balls, you have 20 or 30 balls," said Speid.

"They can place these balls right around the field but if they don't then they can use adults as well because ball boys don't have to be little boys," he added.

Ball boys are employed by leagues around the globe to avoid long delays when a game ball leaves the pitch and its immediate vicinity. However, no ball boys were used in England when the English Premier League restarted after a break due to the pandemic last year. A number of sterilised replacement balls were placed around the field and these were used by players whenever the ball went out of play.

The 2019-2020 JPL season was ruled null and void by the Jamaica Football Federation in May of last year due to the surge of COVID-19 cases in Jamaica.