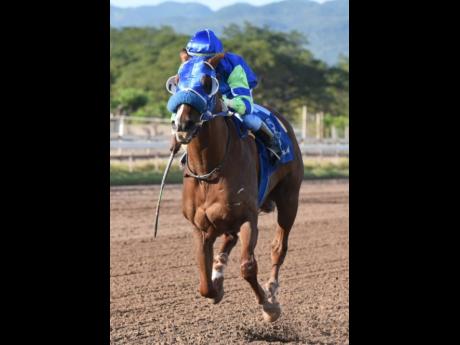 MAHOGANY with Dane Dawkins aboard.

TRAINER Ian Parsard has a hat-trick lined up for Monday's 10-race card, starting with a penalty kick - MAHOGANY, the fastest middle-distance horse in the country - down in class among overnight allowance runners at six furlongs in the seventh.

In another travesty of justice, the conditions system allows MAHOGANY, who clocked 1:16.1 at six and a half furlongs, beating NIPSTER and SENTIENT out of sight in December, to return to the level at which he almost lowered the eight-and-a-half track record in August.

The kicker is that Parsard's runner shares topweight with PRINCE CHARLES, who scrambled home from PRINCESS EMANUELLE and ROHAN KABIR back in January, two weeks after MAHOGANY tore splits of 46.1, 1:10.4, 1:23.3 and 1:36.2 before NIPSTER ran through to win the Ian levy Cup at eight and a half furlongs.

It will be a matter of Dane Dawkins and MAHOGANY racing the clock and 1-0 for Parsard before taking aim at the Mr Lover Lover Trophy double.

A divided event for three-year-olds, non-winners of two races, and imported maidens, the nine furlongs and 25 yards distance sets up nicely for Parsard's United States-bred AWESOME LIZ and in-utero importee, BIG JULE, running in divisions one and two, respectively.

AWESOME LIZ ran her best race in three starts at a mile when mowed down mid-April by a blossoming MINIATURE MAN, who went on to land the 2000 Guineas. She returned mid-May as the 3-5 favourite but missed the break and never recovered at six furlongs, put to the sword by another rising star, SECRET IDENTITY, who, in her next race, lost second on the line to AMYTHEBUTCHER after trying to chase SHE'S A WONDER in the 1000 Guineas.

Throw AWESOME LIZ's last run out the window and put Parsard 2-0 up. AWESOME LIZ has good tactical speed which Reyan Lewis should use to dominate rivals, saving enough for the stretch run, similar to his 1000 Guineas ride aboard SHE'S A WONDER, hence Parsard taking a gamble, putting him up six pounds overweight, as opposed to quick-to-the-draw Omar Walker, who could easily make weight.

However, Parsard has called in Walker to seal the hat-trick aboard BIG JULE, who he won astride in April on the colt's six-furlong debut. Returning a month later at six furlongs, BIG JULE, still looking a bit fat around the girth and fitted with blinkers, weakened inside the last furlong, caught by AMYTHEBUTCHER, who franked the form on her next run, nipping SECRET IDENTITY for second in the 1000 Guineas.

BIG JULE beat up on AWESOME LIZ at exercise two Mondays past and returned to breeze an easy six furlongs in 1:16.3 on Monday. Parsard has ditched the blinkers, which was inspired by a gallop in the equipment alongside MAHOGANY.

Speed, again, will be the deciding factor, which BIG JULE's rivals, bar REGAL AND ROYAL, all seem to lack. REGAL AND ROYAL ran the race of his life in the Kingston, second at the furlong pole behind FURTHER AND BEYOND, before MINIATURE MAN closed to force a dead-heat.

Undone by a quicker pace and level weight in the 2000 Guineas, REGAL AND ROYAL could not repeat his Kingston heroics, finishing sixth. Sitting level at 115lb with BIG JULE, he will try forcing the pace but is suspect at the distance, which his trainer hopes he will address by removing his regular blinkers.