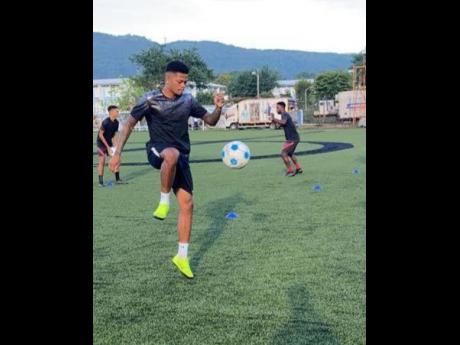 Leon Bailey in training at the Captain Horace Burrell Centre of Excellence, Mona.

Jamaica and Bayer Leverkusen star Leon Bailey has fully recovered from his broken toe and said he is looking forward to the upcoming Gold Cup tournament in the United States and World Cup qualification matches.

Bailey picked up the injury in May while playing a Bundesliga match for his German club.

The 23-year-old is currently in the island on vacation and has been working out with Craig Butler and the Phoenix Academy at the Captain Horace Burrell Centre of Excellence over the last week and he has shown no signs of the injury.

The player confirmed with STAR Sports that he is back to full fitness and looking forward to the upcoming international agenda.

"As it relates to my toe, it is fully healed now. I have resumed peak preparation training with my dad and personal trainer Craig Butler and the Phoenix Academy players," he said.

"I want to thank the Jamaica Football Federation for allowing me to utilise their facilities in my preparation and I'm excited about the upcoming fixtures for the Gold Cup and World Cup qualifiers," Bailey said. Last season the winger had his most productive campaign since his arrival in Germany in 2017. Previously, his best return was nine goals and six assists in the 2017/2018 season. However, last term he had nine goals and eight assists in the league before his season ended prematurely because of the injury.

He also netted fives times in eight Europa League games for the German side in their run to the round of 32.

Meanwhile, Bailey, who was also officially recognised as an Ambassador for Special Olympics recently, said he was delighted to be representing this organisation.

"It is indeed a pleasure and honour to be asked to be the Ambassador for Special Olympics. It has been our mandate to give back to Jamaica in a meaningful way and to use my voice to help those with intellectual disabilities and to assist them as best as I can. I will continue to do this for as long and as well as I can, to help Jamaica," he stated.