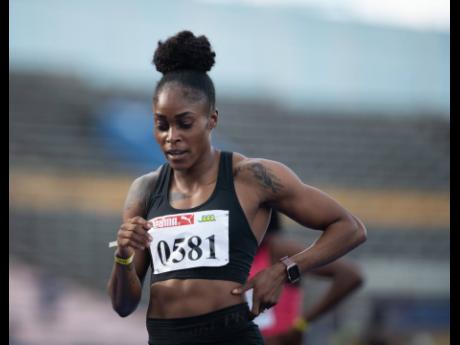 Jamaica's defending Olympic champion Elaine Thompson Herah will compete in the 200 metres at today's Wanda Diamond League in Gateshead, London. She heads nine Jamaicans who will be in action at the meet.

Thompson Herah will be hoping to improve on her season's best 22.02 seconds in her final run before Tokyo. Her training partner at MVP Track Club, Natasha Morrison, who has a season's best 22.74 will also contest the event along with the likes of American Tamara Clarke whose season's best is 21.98 and Blessing Okagabare of Nigeria with a season's best of 22.59s.

Several of the country's top sprint hurdlers will also be in action.

In the women's 100m hurdles, 2015 World champion Danielle Williams, who missed out on making the team to Tokyo after finishing fourth at the National Senior Championships, takes on fast-rising star Britany Anderson who edged her out at the Trials. The second best Jamaican this year with a season's best 12.62 seconds, Williams is coming off a good win in Atlanta three days ago. Anderson, with 12.58, is the top Jamaican in the event this season and has beaten Williams twice so far in 2021.

Defending Olympic champion Omar McLeod, the country's number one and world number two with 13.01, seconds failed to make the team to Tokyo after finishing at the back of the field at Trials. He will take on Jamaica's number two and National champion Ronald Levy, who won with 13.08, and Rasheed Broadbell, the country's number three with 13.10. Broadbell was denied a medical exemption after failing to compete at the Trials.

Janieve Russell will once again be involved in another tough women's 400 metres hurdles when she will battle Dutchwoman Femke Bol and American Shamier Little who have both gone sub-53 seconds in back-to-back races. Bol came out on top on both occasions in close finishes. Russell who was third in Monaco with a season's best 53.68 will be hoping to lower that time going into the Olympics.

National 400m champion Stephenie Ann McPherson will be the other Jamaican in action. She will be attempting to make it three sub-50 seconds runs in a row after her personal best 49.61 to win at the Trials and 49.99 while winning in Hungary last week.