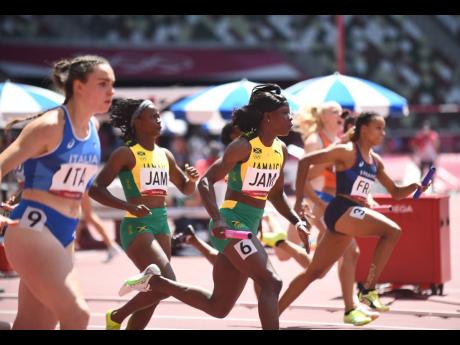 Remona Burchell passes the baton to Shericka Jackson on the final exchange in the women’s 4x100 metres semi-final at the Tokyo 2020 Olympic Games, at the Tokyo Olympic Stadium in Tokyo, Japan, yesterday.

With talks of a possible world record for Jamaica in the women's 4x100 metres relay, Shericka Jackson is warning that the focus must be on execution if the team is to meet its potential, after a less than convincing third-place finish in the heats at the Tokyo 2020 Olympic Games.

The team of Briana Williams, Natasha Morrison, Remona Burchell and Jackson, the 100m bronze medal winner, clocked 42.15 seconds for third place in the heat, finishing behind Great Britain, 41.55 and the United Stated, 41.90.

With double Olympic sprint champion, Elaine Thompson Herah, and 100 metres silver medallist, Shelly-Ann Fraser-Pryce, to be added to the team for the final, Jackson underlined that it is pointless to talk about medals and records unless there is good execution.

Williams, who was making her first appearance at this level, was thrilled with the experience and is also looking forward to more success in the medal round.

"Well, coming out on the track, I just felt so excited and I felt the energy and you know, taking in everything, the stadium, it was so beautiful and I'm just glad to be out here for the first time," said Williams.

Meanwhile, Jamaica's men produced an impressive win in their 4x100-metre heat, as the team of Jhevaughn Minzie, Julian Forte, Yohan Blake and Oblique Seville clocked 37.82 seconds to finish ahead of Great Britain, 38.02 and Japan, 38.16 seconds.

"I think the execution wasn't the best. It's our first time running together in competition and we didn't have a lot of time to practise. I think we have very good chemistry," said Forte.