Dwyer to use Olympic final as launching pad 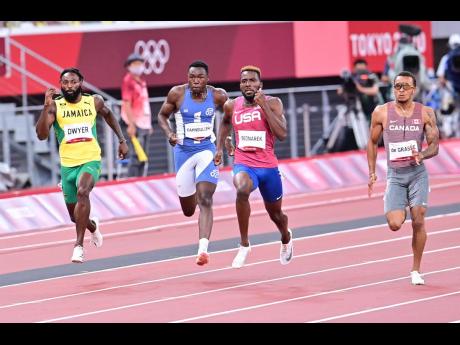 Olympic 200 metres finalist Rasheed Dwyer was left disappointed with his performance in yesterday's medal-round contest inside the Tokyo Olympic Stadium.

However, the experienced sprinter believes qualifying for the final despite the challenges suffered this year has provided him with a solid platform on which he can launch an even more successful campaign next season, with the World Athletics Championships in Eugene, Oregon, on the calendar.

The last Jamaican to qualify for the men's 200-metre final at a major championships was Usain Bolt at the 2016 Olympic Games in Rio de Janeiro, Brazil. Dwyer would have wanted a better execution and higher finish in Tokyo. He crossed the line in seventh position, with a time of 20.21 seconds.

The event was won by Canadian Andre De Grasse, in a personal best and national record of 19.62 seconds, with the American pair of Kenneth Bednarek, 19.68, and Noah Lyles, 19.74, taking the silver and bronze medals, respectively.

"It's been a rough season and I came out and made the final. I've finished in the top eight, I am very pleased with that," Dwyer told STAR Sports.

"I'm basically not pleased with the time or the placement, but I'm very pleased with being able to come out and represent my country on this stage," added Dwyer, the 2014 Commonwealth Games champion.

"I think, based on the number of injuries I've had this year, which hampered my preparation for these Games, I know that if I wasn't hurt I could have done a lot better here," he added.

With the next four years delivering three World Athletics Championships and one Olympic Games, Dwyer is well aware that there will be opportunities to build on this performance. He has highlighted a return to the sub-20 second mark as a target for the rest of the 2021 campaign.

"Yeah, I most definitely think it is a good base to start my preparations for next season and beyond. My season isn't done yet, as I am going to go on the circuit and see if I can run a couple of races and try to go beyond the 20-second barrier," said Dwyer.

Dwyer sees his run in the final as a precursor of things to come for Jamaican male sprinters.

"I feel honoured that from 2016 I am the first male Jamaican in a 200 metres final, so I'm very happy with that," Dwyer said.

"In terms of the preparation of our youth, I think we have some tremendous youngsters coming up. Oblique Seville comes to mind, as well as the young guy from Edwin Allen (Bryan Levell) and others. We also have great mentors and coaches in Jamaica so it's just a matter of time before these guys develop fully," said Dwyer.