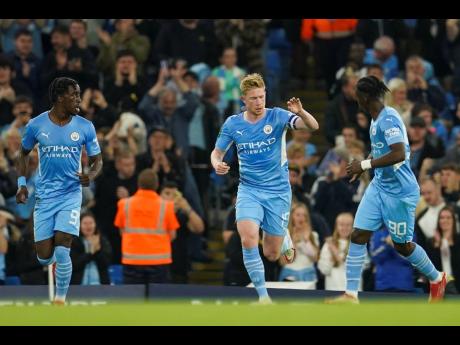 Bidding to win the English League Cup for a fifth straight season, Manchester City's players fell behind during a game in the competition for the first time in nearly four years yesterday.

They immediately put that right.

City responded to conceding a surprise opening goal at home to third-tier Wycombe Wanderers in the 22nd minute by scoring three times before half-time and eventually easing to a 6-1 win. Among the scorers for City were Kevin De Bruyne and Phil Foden as they build up their match fitness after early-season injuries.

Pep Guardiola's team last tasted defeat in the League Cup in October 2016, and have not trailed since the first leg of the semi-finals in January 2018.

Like City, Liverpool used the competition to hand starts to fringe players and senior debuts to a number of its promising youngsters - including a 16-year-old in Kaide Gordon - and they enjoyed a 3-0 victory at fellow Premier League team Norwich. Japan forward Takumi Minamino started and finished the scoring.

Liverpool and City are tied on a record eight League Cup titles. Six of City's have come in the eight previous seasons.

Everton were one of three Premier League teams taken to a penalty shoot-out by lower-league opposition, and fell to an 8-7 loss to second-tier Queens Park Rangers following a 2-2 draw after 90 minutes. Southampton and Leeds fared better to overcome teams who were in the top flight last season - Sheffield United and Fulham, respectively.

Guardiola fielded an interesting team, with a back four of academy graduates - CJ Egan-Riley, Luke Mbete, Finley Burns and Josh Wilson-Esbrand - getting first senior starts in front of American goalkeeper Zack Steffen, making his first appearance since recovering from the coronavirus.

Thankfully for Guardiola, he had a stellar cast in the attacking positions and he needed them to deliver after Brandon Hanlan put Wycombe ahead in front of a stunned home crowd at Etihad Stadium.

Guardiola was delighted with the performance of his young defenders and said City "can count on them, absolutely" in the bigger competitions this season.