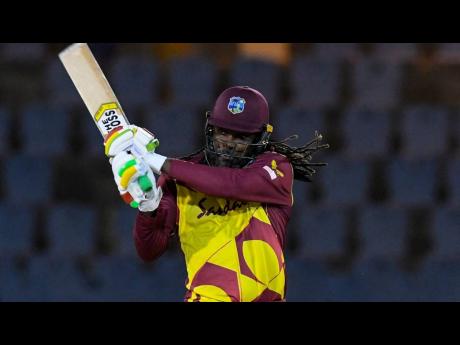 Chris Gayle put in another unbeaten knock for Team Abu Dhabi yesterday, to help his team to its sixth win of the Abu Dhabi T10 League and into the playoffs.

His 30 not out, off 16 balls, a game-changing over with the ball from captain Liam Livingstone, and a sensational 15-ball half-century - the fastest this season - by opener Philip Salt, saw Team Abu Dhabi beating Chennai Braves by seven wickets at the Zayed Cricket Stadium here.

Livingstone had opted to bowl first after winning the toss, and Jamie Overton removed Braves' Bhanuka Rajapaksa early. However, Mohammad Shahzad (53 off 30 balls), Chennai Braves' other opener, and Dasun Shanaka (11 off 11 balls) steadied the ship.

With Braves cruising at 75/1 after seven overs, Team Abu Dhabi needed a breakthrough and they got just that, and more, courtesy of Livingstone in the eighth over.

The part-time spinner dealt the Braves a triple blow, removing Shanaka and Samiullah Shinwari in consecutive deliveries to start his over. The captain capped off the game-turning over with Shahzad's scalp in the final delivery to reduce the Braves to 82/4.

The Angelo Perera-led Chennai Braves could not recover from there on, as their innings wrapped up for 107/6 in their allotted 10 overs.

Needing a solid bowling performance to defend their total, they managed to get early wickets as Mark Deyal sent back Paul Stirling and Livingstone in the second over.

Wicketkeeper-batsman Salt, however, was in mesmerising form at the other end. The Team Abu Dhabi opener scored a 15-ball half-century en route to 63 off just 20 balls. Nuwan Pradeep faced the full wrath of Salt's heavy-hitting, conceding 46 in his two overs.

Curtis Campher finally removed Salt from the crease, but Gayle, who had scored an unbeaten 52 in his side's previous match, and Colin Ingram (eight off three balls) made sure Team Abu Dhabi crossed the finish line with three overs and seven wickets to spare.

The win over the winless, bottom-place Braves took Team Abu Dhabi to 12 points from eight matches and sealed their spot in the playoffs. Although they are on the same points as Decan Gladiators, they are now in second place in the standings, based on net run rate.

Along with Team Abu Dhabi and Deccan Gladiators, Bangla Tigers and Delhi Bulls were confirmed for the playoffs after Sunday's matches.