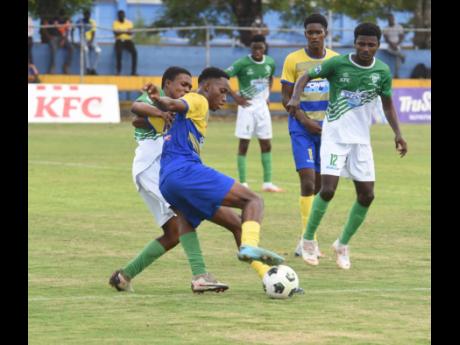 St Elizabeth Technical High School (STETHS), who won six straight Ben Francis KO titles under current coach Omar 'Rambo' Wedderburn, are back in the final for the first time since 2015.

STETHS who won the knockout trophy from 2010 to 2015, clipped Frome Technical 1-0 yesterday to advance to the final. They will meet Edwin Allen High who drubbed Manchester High 4-0 in the opening match of a double-header played at the STETHS Sports Complex in Santa Cruz.

In the day's feature match STETHS maintained their dominance over Frome, a team they beat 6-0 in last month's quarter-finals of the daCosta Cup.

Frome were the early aggressors in yesterday;s match and came close to taking the lead in the 19th minute but Javel Clarke's lob shot over an onrushing goalkeeper hit the outside of the post and went out of play.

With two minutes to go before the half-time break STETHS took the lead when Michael Jerman's deflected shot wrong-footed the Frome goalkeeper before lodging in the back of the net.

Clarke was denied by the woodwork once more as Frome searched for the equaliser seven minutes after the break. The hosts, however, held on for the win.

Coach Wedderburn was a happy man at the end.

"It's very good for us to be back in a final. It will uplift the spirit of these players because it's been a while. STETHS is a school that likes to greet students with a trophy to encourage them to come and join us. This is a way for us to get back on track," said Wedderburn who applauded his boys for executing the game plan.

"This was a semi-final and the team came with different approach. We worked on concentration during the past two days because that last result (6-0) was in 2021. It's a different thing in 2022," he added.

Coach of Frome, Cleighton Stephens, said while they put up a spirited performance he is disappointed in not making the final in a season that was going well for them.

"We changed a lot from the first game going back to our original formation. It made us a bit more organised. We got some chances and didn't score," Stephens said.

"I guess it wasn't to be. I still have to congratulate the guys, it's a young team and have a lot to build on for next season," he added.

Edwin Allen reached the final for the first time with an impressive performance in the first game. Richard Henry with a brace (6th and 60th minutes), Jahiem Harris (76th) and Ackeem Mullings (92nd) were the scorers.