Double Crown back to dominate mile 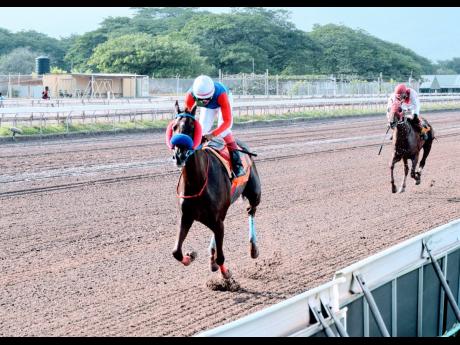 HAVING spent his get-out-of-jail time between open allowance and graded stakes, placing third and fourth to out-of-class KING ARTHUR in consecutive races, before finishing fifth behind HOVER CRAFT outstaying EROY at nine furlongs and 25 yards, DOUBLE CROWN makes his return to overnight-allowance company in Saturday's seventh event at a mile.

Throw his worst effort at the higher level out the window, an eighth-place finish on November 27 behind EROY, FURTHER AND BEYOND and ROY ROGERS. That afternoon, DOUBLE CROWN had broken the gate before the start and was merely put through his paces by Omar Walker, who asked little of him for the last furlong and a half.

Though eased along the rail, DOUBLE CROWN hardly lost any ground among the runners-up, finishing nine and a half lengths behind EROY and FURTHER AND BEYOND, who both had six lengths to spare on third-place ROY ROGERS.

Given a break in December, when he would have qualified to re-enter overnight allowance, DOUBLE CROWN spent the month away, avoiding the likes of ONE OF A KIND, who returned to the level to beat BILLY WHIZZ and EXCESSIVE FORCE at a mile.

With that trio having left the group for open allowance, DOUBLE CROWN has slid back down to the level for his share of the musical-chairs pie. Though oddly entered minus his regular tongue tie and cheek pieces, DOUBLE CROWN has been moving well at exercise, completing back-to-back Sunday morning gallops out the mile chute.

Dane Dawkins, who starred last Saturday's meet with a four-timer is aboard DOUBLE CROWN with topweight 126lb. SUPREME SOUL, the 2019 Triple Crown winner, still groping for form, is closest at the scale, carrying 121lb after being blinded with speed by stablemate AWESOME TREASURE at nine furlongs and 25 yards on New Year's Day.

Having raced 10 times last season without a victory, SUPREME SOUL will find down-in-class DOUBLE CROWN too tough to beat at a mile.