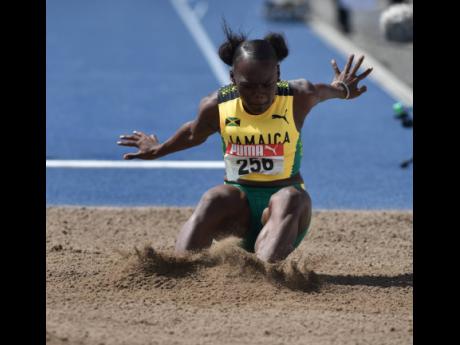 Serena Cole on her way to gold in the Girls U20 Long Jump event at the Carifta Games in Kingston yesterday.

Despite winning her first individual gold medal in the girls' Under-20 long jump competition at the Carifta Games, Serena Cole has her sights fixed on competing in the 100m at the World Athletics Under-20 Championships in Cali, Colombia, this summer.

Cole, 17, captured her second gold medal at Carifta when she leapt to 5.89m.

Her teammate Kay-Lagay Clarke took the bronze medal with a leap of 5.64m while Kayssia Hudson from French Guiana claimed silver with a mark of 5.77m.

Cole, who was the lead-off runner for Jamaica's 4x100m relay team, which broke the World Under-20 record on Sunday evening, finished third at Carifta Trials behind her Edwin Allen High School teammates Tina and Tia Clayton.

She was not chosen by her coach Michael Dyke to run the 100m at the ISSA/GraceKennedy Boys and Girls' Athletics Championships as the Clayton twins, who have run faster than Cole this season, were selected instead.

However, Cole, who has a season's best time of 11.51 in the 100m, said it is her favoured event and she will be giving it full focus at the National Junior Trials.

"Right now, I want to do the 100 metres, but I did not get a chance to do it at Champs but hopefully at the World Junior Trials, I will be doing the 100m," she said. "This is my favourite event and I love it because I prefer the sprint events."

However, Cole's personal best (PB) jump of 6.36m this season has qualified her for the World U20s. Her mark has ranked her second in the world this year behind Shiqi Xiong (6.37m) of China.

Cole says that she was not pleased with her efforts in the long jump yesterday because she wanted to improve her PB.

"I am feeling great about winning my second gold at this championships," she said. "However, I am not pleased about my long jump performance because I did not find the board on any of my jumps, but hopefully I get it better someday. I already have made the mark in the jump for the World Juniors qualifiers, but I wanted to PB today, so I am disappointed that I did not achieve this at the Carifta Games."